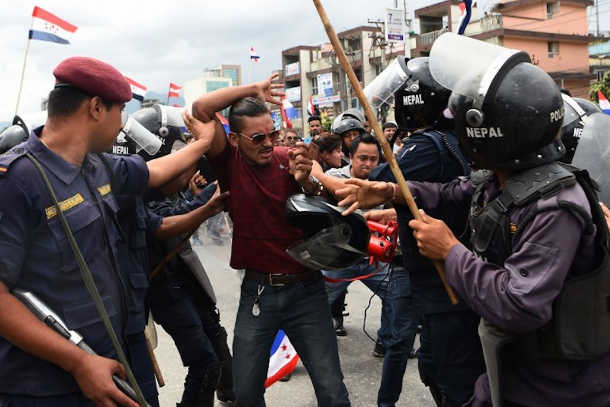 Fake news can be used to further divide Nepal, which has a fragile democracy. Here activists of the Tarun Dal, the youth wing of the Nepali Congress Party, are seen scuffling with police during a demonstration against the government in Kathmandu on July 21. (Photo by Prakash Mathema/AFP)

In Nepal, as in many countries, the press is considered the fourth arm of government; a force for good that is supposed to influence the country's legislative, executive and judicial system for positive development.

But what happens when the media can no longer be fully trusted?

Over the past few years I've worked in the communications department for my employer and have had to deal with a fair number of "fake" or groundless accusations both online and in print media.

Such fake news usually stems from a personal conflict of interest on behalf of the writer. In some cases, a ghost writer fabricates stories to serve their personal vendetta.

I know a few people who in recent years have become victims of fake media attacks; cases where journalists have sacrificed their personal ethics and attacked someone's dignity for a bribe or some other inducement.

And it's not just the media churning out fake news. We also see fake doctors, fake teachers, private and public servants with fake academic credentials — even "fake" students who are paid to sit exams on behalf of those who badly need a better grade.

There are many more examples of this kind of behavior and it is making society a much less wholesome place to live in.

But while we can't stop all the rumors and fake news, we can refuse to support it by trusting in our own instincts and remembering the teaching of the Bible, particularly Jesus' words that "the truth will set you free" (John 8:32).

The media is highly influenced by whatever political party and beliefs they subscribe to. New outlets routinely produce reports to counter articles that challenge their position on a range of issues of public interest, and it's often hard to know which one to believe.

Lately, Christian churches and faith-based NGOs in Nepal, which still lacks full religious freedom, have found themselves the targets of an avalanche of fake news. For example, there are many false reports of forced conversions from other religions, despite this being illegal in the country.

But many media outlets don't offer any deeper analysis and lack even a basic understanding of the various Christian denominations and sects that are active in the country. Christian NGOs are tagged as proselytizing agencies despite operating social services in good faith.

This fake news has damaged the image and reputation of upstanding Christian groups who are doing commendable work in their communities and in the country.

For several years now Nepal's online media has emerged as one of the fastest-growing sectors, but many websites and agencies remain unchecked.

I have seen many immature writers who claim to be experienced journalists running their own online news sites because the barrier to entry is so low. It requires little investment and not much in the way of human resources.

Such websites often produce news that has either been copied from other sources or is simply untrue.

This kind of professional malpractice, or "yellow journalism," can be blamed at least partly on a lack of proper monitoring.

In its latest annual report, the Press Council Nepal writes, "even though the number of media agencies are increasing, factual journalism is dying, editorial freedom is narrowed, and corporate pressure is increasing."

The council further reports that 2018 has been far from satisfactory in terms of respect for journalistic ethics and standards.

As I mentioned, such non-compliance is usually tied to political interest, personal conflict of interest, or personal vendettas.

It has led the media to deviate from its duty to inform the public of breaches of good governance, and has fueled the rise of autocratic systems within Nepal's weak and fledgling democracy.

Many of these "immature" journalists seem to forget that, apart from disseminating information, an important function of the media is to galvanize the public to action when the government makes a misstep.

According to reports from the press council, there are 3,865 print media, more than 1,135 online media sites, 700 radio stations and about 100 TV stations registered in Nepal, not all of which are operating properly.

Online media is obviously mushrooming but we are also seeing more sites that are unreliable, unethical, and busy spreading baseless reports.

Many are published by Nepalese overseas and seem to operate almost at random. The news flows quickly through social media and other social networks, allowing scant time for responsible mediators to intervene and check their credibility before the damage is done.

Nepal's Electronic Transactions Act, 2008 was established to curb the spread of hate speech and reports that pose a risk to public morality or which threaten to divide people from different backgrounds.

But even this legislation has had a limited impact.

The council received at least 112 complaints last year about abuses of journalistic ethics, but I haven't seen it do much in response apart from insisting the errant outlet publish a correction.

At most, offenders risk being stripped of their press passes. Online news sites seem even freer to do as they please because there is no working mechanism to ensure they are properly registered.

I've also found some websites simply take down fake news if the objections become too big to ignore.

But that's not good enough, as by that point the harm has been inflicted. And while the reputation of an individual or organization has been stained, and their dignity compromised, those responsible offer no compensation.

In some cases, fake news can be lethal.

Take Nepal, which is vulnerable to natural disasters. In such a country it's essential the information being bandied about is as accurate as possible, for example to aid rather than hinder early warning systems and help minimize the adverse affects when disaster strikes, or is about to strike.

Many Nepali children still have to cross rivers using simple rope bridges to get to school, meaning their parents need to be well-informed about floods or other developments.

The media must shine a light on the plight of people living in remote areas and share their stories with society so forces can be galvanized and aid delivered.

Unfortunately, fake news derived from secondary sources that has been cobbled together from inside someone's office or bedroom on a computer is "topping up" the mainstream news cycle.

This serves as a potential threat, especially when people are sending these stories out into the ether without properly checking the facts, or worse still, knowingly distorting the truth.

Sadly, few media in Nepal are acting like responsible actors by playing the role assigned to the media worldwide, which is to provide another cog in the system of checks and balances on those in power.

In fact, we could say the nation's media has entered a storm of confusion where people are no longer sure if they are watchdogs — or lapdogs.

Nepal's media should win the hearts and minds of the people with true, factual and balanced news reporting while observing the proper code of media ethics.