Popular festival can be a catalyst for uniting people against rising religious extremism, says priest 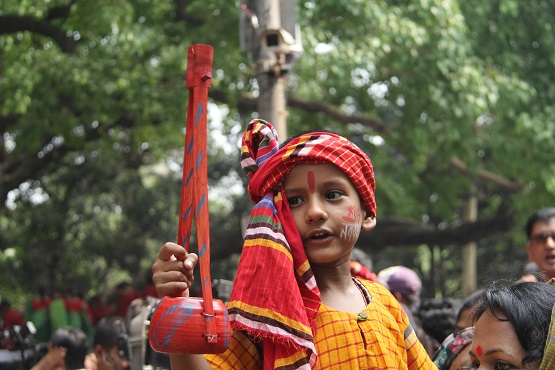 During the past several weeks, Suborna had been painting and making masks of human, animal and bird faces with her classmates from the Fine Arts Institute of Dhaka University.

Every year, the students from the institute prepare and sell hundreds of masks during Bangla New Year, popularly known as Pohela Boishakh, the first day of the Bengali calendar, which falls on April 14.

But Suborna, 28, a Muslim and final year graduate, fears she won't sell many this year due to a government ban on face masks for security reasons.

Security concerns were also sited last week by the government for their reason to ban all open-air New Year celebrations after 5 p.m.

"This is bad news for all. Pohela Boishakh is our largest cultural festival," says Suborna, who goes by only one name. "Instead of securing the festival the government is placing restrictions which will curtail people's free celebration of the occasion," she says.

The government's restrictions have been implemented as a precautionary measure against Islamic militants and to help prevent sexual assaults against women, which occured last year. The church and the New Year

Christians, a tiny minority representing less than one percent of the country's population of 160 million, embrace the New Year with prayers and festivities.

Across Bangladesh, churches hold special prayers for the well being of the nation and Christian organizations, including education institutes, organize rallies, fair and cultural programs.

The church "highly appreciates and endorses" universal festivals like Pohela Boishakh, which brings together people of all religions including indigenous people, says Father Patrick Gomes, secretary of the Interreligious Dialogue Commission in northern Rajshahi Diocese.

"People need a platform like this to bring an end to all the differences they have. This is very important for dialogue, unity and the common good."

A celebration of culture and traditions

Every year on April 14, thousands of people, irrespective of caste and creed, flock at dawn to a large banyan tree in Ramna Park in the Bangladeshi capital Dhaka.

The singing of the song, composed by Bengali poet Rabindranath Tagore, marks the start of daylong festivities for the largest traditional, non-sectarian festival, observed by ethnic Bengali people in Bangladesh, India and beyond.

The festival celebrates the simple rural cultural heritage of ancient Bengal, which today is comprised of present-day Bangladesh and the Indian state of West Bengal. In modern times, the festival has gained popularity in urban centers like Dhaka where people migrated en masse in the hope of bettering their lives.

The day is a public holiday across Bangladesh.

As part of the day, the teachers and students of the Fine Arts Institute will join hundreds of people during the colorful mongol shovajatra (welfare procession) which includes large figurines of birds, animals and dolls wearing colorful masks, singing and dancing to the beat of drums and rhythm of music.

Music concerts, cultural programs and processions are held all over the country on the day as well. On the street, people enjoy popular folk traditions such as puppet shows, snake charming, cock-fighting, street plays, and yatra (folk drama). Many Bangladeshis see the feast as a call for a life of simplicity.

"People's lives in the modern age are complicated and divided in various categories and classes. Pohela Boishakh inspires us to look at our simple, rural roots from the hectic, busy urban life," says Ankur Singh, 29, an aspiring artist from Dhaka.

For Suborna, the arts student, the festival is a call to end differences and forge unity.

"We celebrate our traditions and cultural heritage on this day together forgetting our differences and backgrounds. It helps us put aside failures and shortcomings of the past year, to start a new year with a clean heart," she adds.

Opening of a halkhata or a new account book, is a common feature of Pohela Boishakh festival. Business people close their old accounts, collect debts and offer sweets to customers as they start a new financial year.

"New Year brings us new hope for good prospects. Maybe we couldn't gain good achievements in our personal and professional lives in the past year, but in the New Year we hope to do better," Shafique Islam, 33, a Muslim clothing businessman in Dhaka told ucanews.com.

Food plays a central role in the celebrations.

People also cook special dishes including different types of rice, meat and fish for friends and relatives who visit them. They offer sweets to their guests, as a gesture of happiness and good wishes.

In villages, women clean their houses and, days before the festival, they place alpana drawings out in their yards and on their floors.

During the festival, women wear white sarees with a red border while their hair is decked with flowers and men dress in white and red panjabis and pajamas.

For Bangladeshis, the New Year comes amid a climate of fear and anxiety.

The Muslim-majority nation has seen a sharp rise in religious bigotry and fanaticism in recent times, with Islamic militants targeting atheist writers and publishers, and minority groups including Shias, Christians and Hindus.

During a rally in Dhaka on April 9, leaders of a radical Islamic group, the Olama League, called on the government to ban Muslims from engaging in Pohela Boishakh festivities, sparking an outcry from cultural activists and secularists. But the popular festival could be a catalyst for uniting people against rising religious fundamentalism, says Father Tapan De Rozario, a Catholic priest and chairman of the World Religions and Culture department at Dhaka University.

"Pohela Boishakh is a time to reignite religious harmony and tolerance as this festival cuts across religious boundaries. Some groups might dislike this festival, but they can't stop people from enjoying the feast because they love their culture and stand for interreligious harmony," says Fr. De Rozario

"The spirit of Pohela Boishakh is unity in diversity — we are different in many ways but our age-old culture binds us together. Celebrating this feast emboldens a sense of solidarity and helps us carry on our proud tradition of religious harmony," the priest adds.

The festival is "not about rallies, fair and foods," which the corporate culture has promoted for their own interests, he says.

"It's more about making commitments for good deeds, wishing good for all people and to refrain from harming others. In rural areas, people still celebrate this spirit from their hearts, but in urban areas it's more like an exhibition," Shekhar told ucanews.com.

Amid extremist threats, the nation should "look back to its roots" for lessons, he suggests.

"The historical and cultural background of the nation can be our guiding light. Now, it's time to look at our roots to resist the rise of religious bigotry and intolerance," he adds.

Watch this ucanews.com video for more on the Bangla New Year celebrations in Dhaka.