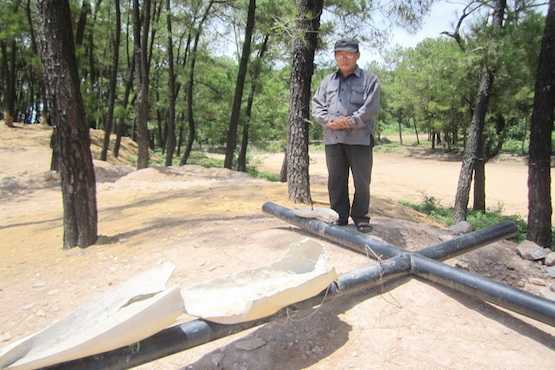 A Benedictine priest in Thua Thien Hue province of central Vietnam looks at the cross uprooted by the mob. (Photo supplied)

Benedictine monks in Thua Thien Hue province of central Vietnam have strongly condemned the authorities and police who stormed a monastery and assaulted them following a long-term land dispute.

Some 200 policemen and others with knives, iron rods and batons broke into the monastery June 28 and 29, violently attacking the Benedictines, desecrating a cross and a statue of Jesus, said Father Anthony Nguyen Van Duc, superior of the Benedictine monastery in Thien An.

"Officials from the Thuy Bang commune of Huong Thuy Town witnessed the mob uproot the iron cross that the monks had recently erected on June 26," Father Duc said in a press release June 29.

The priest said he strongly condemned the assaults and the monks "wish to seek justice in a peaceful manner to protect the church's legal property until our last breath."

The monks have had legal ownership of the monastery and its 107 hectares of pine forests and farmland since 1940. "We have never transferred the ownership of the property to any individual or organization," Father Duc said.

It is reported that, since 1975, the communist government has "borrowed" 57 hectares of land from the monastery and assigned it to a forestry company.

In 2000, the government confiscated the rest of the land and assigned it to a tourism company, but allowed the Benedictines to retain six hectares of land including the monastery.

Further compounding the situation, local authorities had previously confiscated land from the Benedictines and awarded it to other officials who in turn sold the land to other parties to build houses and Buddhist pagodas.

The attack on the monastery was the third time authorities are alleged to have desecrated the Benedictine cross since 2015, having previously broken it and thrown it in a stream, Father Duc said.

The superior accused the group of choking and assaulting unarmed monks who tried to protect the cross. He said one officer was seen beating Father Anthony Vo Van Giao around the head many times with a wooden stick.

A group of women shouted and abused the monks using vile language, while many police and thugs threatened to beat the monks and visitors, Father Duc said.

Meanwhile, some police officers who stationed themselves at the monastery's gate also stole a monk's motorbike, the priest alleged.

Tue apologized to the injured monks including one who had been beaten unconscious and prevented by police from being hospitalized.

Father Loi quoted Tue as saying, "We are sorry that the incident happened, which was out of our control." Tue also blamed it "on both sides who did not control their tempers," the priest said.

He said Tue promised to deal promptly with the land dispute between the the government and Benedictines while, in the meantime, workers are cutting down pine trees and building a five-meter-wide road to separate the monastery from the rest of the confiscated land.

Father Loi said the "police are still monitoring us and visit us at all hours, day and night." However, the monks are repairing the broken statue and will reinstall it in its rightful place to protect their property.