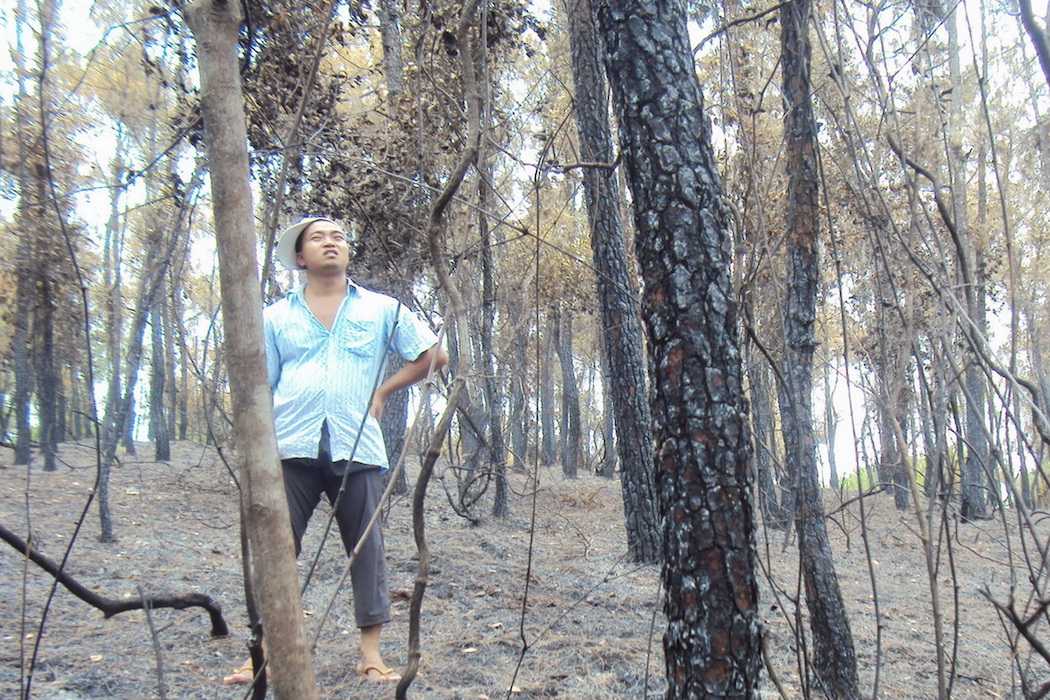 A monk looks at pine trees destroyed by fire near the Benedictine Monastery of Thien An in Vietnam. (Photo by Peter Nguyen/ucanews.com)

Benedictine monks in a central Vietnam province have criticized authorities for ignoring forest fires that they claim were started deliberately.

Brother Stanislas Tran Minh Vong said two fires were found in pine forest around the Benedictine Monastery of Thien An just outside the ancient city of Hue in Thua Thien Hue province on the afternoons of May 22 and 23.

Brother Vong, 81, said 50 monks used water pipes, hoes, shovels, knives and other tools to extinguish the first fire, which broke out about 300 meters from the monastery.

"A group of gangsters shouted at us and tried to prevent us from extinguishing the fire, which was approaching the monastery," he said. They also told the monks that the forest does not belong to the monastery.

Two security officers from Thuy Bang commune saw the incident but did nothing to stop the flames. "They tried to take away cameras from some monks who were videoing the fire to find its cause," said Brother Vong.

Brother Vong said the second fire was put out by Benedictines and some soldiers.

Father Louis Gonzaga Dang Hung Tan, head of the monastery, said four fires have started in the area this year. They destroyed five hectares of pine forest planted by the monks decades ago.

"After examining the scene, we confirm that these fires were caused by people. All fires aimed to cause disorder to the monks' life and religious activities," Father Tan said.

The priest said some groups of strangers have broken into the monastery and watched the monks' work for recent months. However, they have never been present at fires and protected the monastery's properties, he added.

He also accused some individuals and organizations of destroying and confiscating the monks' land and properties.

The monks have had legal ownership of the monastery and its 107 hectares of pine forest and farmland since 1940.

Since 1975, local authorities have "borrowed" or confiscated land and assigned it to state-run forestry and tourism companies. The monks were allowed to retain only six hectares of land including the monastery.

The monks say they have never transferred the ownership of properties or land to any individual or organization.

"We ask relevant individuals and organizations to respect our dignity and basic human rights by laws," Father Tan said.

He demanded they stop starting forest fires and preserve the pine forest and the monks' spiritual values, which help create a clean environment.

The area is now in the dry season lasting from May to September. Five rainwater containers at the monastery are running out and pools used to water orange farms have dried up. Monks have to carry water 10 kilometers to use for their daily activities.

"It is unfair that we are not allowed to use our 49-hectare lake near the monastery," said Father Tan, referring to a lake confiscated by the government.