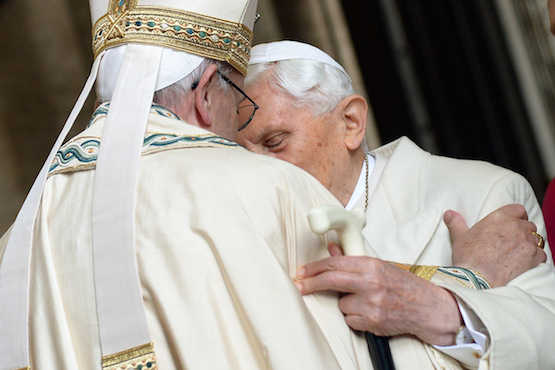 Pope Emeritus Benedict XVI (right) hugs Pope Francis in St. Peter's Basilica before the opening of the "Holy Door" to mark the start of the Jubilee Year of Mercy, on Dec. 8, 2015 at the Vatican. (Photo Vincenzo Pinto/AFP)

On the eve of the fifth anniversary of Pope Francis' election, retired Pope Benedict XVI defended the continuity of the church's teaching under his successor and dismissed those who criticize the pope's theological foundations.

In a letter sent to Monsignor Dario Vigano, prefect of the Vatican Secretariat for Communication, Pope Benedict applauded the publication of a new book series titled, The Theology of Pope Francis.

"It contradicts the foolish prejudice of those who see Pope Francis as someone who lacks a particular theological and philosophical formation, while I would have been considered solely a theorist of theology with little understanding of the concrete lives of today's Christian," the retired pontiff wrote.

Msgr. Vigano read the letter during a presentation of the 11-volume series on March 12.

Pope Benedict has made no secret of his affection for and admiration of Pope Francis.

During a Vatican celebration for the 65th anniversary of Pope Benedict's priestly ordination June 28, 2016, the retired pope expressed his sincere gratefulness to Pope Francis, saying that his goodness "from the first moment of your election, in every moment of my life here, touches me deeply."

"More than the beauty found in the Vatican Gardens, your goodness is the place where I live; I feel protected," Pope Benedict said.