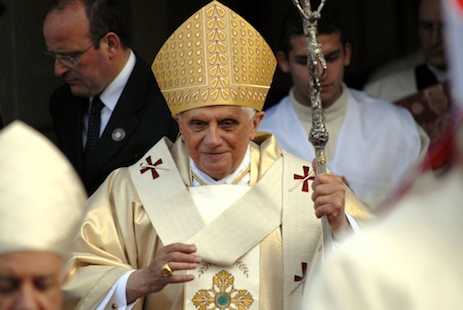 Pope Emeritus Benedict XVI, responding to a noted atheist mathematician and philosopher who had criticized his handling of sexual abuse scandals, on Tuesday (Sept. 24) released a long letter that defended his record and criticized the logician’s reasoning.

Excerpts from the Aug. 30 letter, one of Benedict’s few public statements since resigning on Feb. 28, were published in Tuesday’s editions of La Repubblica, a Rome-based daily newspaper alongside a piece from his critic, Piergiorgio Odifreddi.

In his response, Benedict wrote, “I never tried to cover these things up.” He added, “That the power of evil has penetrated so far into the world of faith is a suffering we must bear,” while also calling for strong efforts to prevent it from happening again.

Benedict’s letters were in response to Odifreddi’s 2011 book, “Caro Papa ti scrivo” (Dear Pope, I write you), which was itself a response to an earlier book Benedict wrote. Odifreddi’s book had posed a series of provocative arguments about the sexual abuse scandals gripping the church.

While remaining cordial and measured throughout the published excerpts, Benedict also criticized what he called Odifreddi’s “religion of math,” calling it “empty.”

Benedict also disputed the claim that abuse is pervasive in the Catholic Church, noting that “according to research by sociologists, the percentage of priests guilty of these crimes is no higher than those present in other similar professional fields.” Critics, he said, should not “present this deviation as if it were filth pertaining only to Catholicism.”