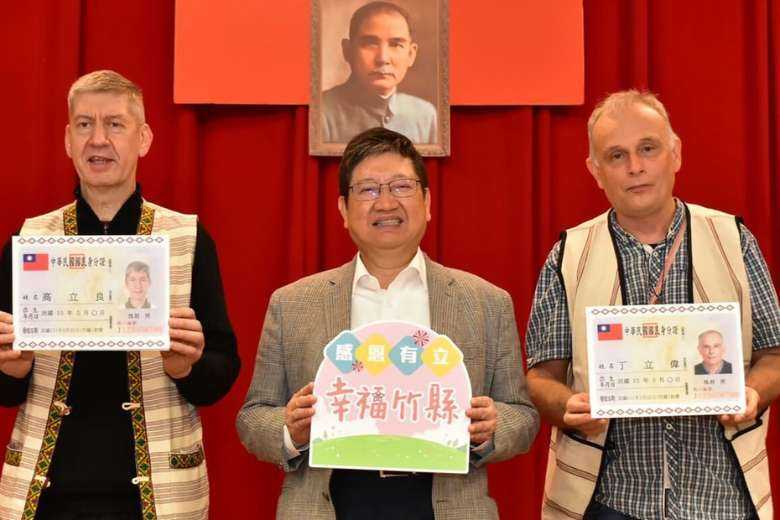 Taiwan has honored two Belgian Catholic priests with national identity cards after granting them citizenship for years of service to poor families and disadvantaged students in the island nation.

The Taiwanese government approved their applications for naturalization earlier this year based on their special contributions to the country.

Commissioner Yang expressed his gratitude to the priests for playing a vital role in supporting indigenous communities in Hsinchu County.

He noted that the priests dedicated their youth to educate poor school children in the mountainous region, driving them to and from school for more than three decades.

The priests have been based in Jianshih and Zhudong townships for many years. They served poor families and disadvantaged students by hosting summer and winter camps so that they could continue their studies, a statement by Hsinchu County's government said.

"Taiwanese indigenous people are so friendly and generous. I feel we are a family ... receiving the ID card from the government means they recognize my work"

Father Lardinois came to Taiwan when he was 26. He can speak fluent Mandarin and Atayal, the language of the ethnic Atayal people.

The priest said his life in Taiwan is full of happiness. "Taiwanese indigenous people are so friendly and generous. I feel we are a family," Lardinois said, adding that "receiving the ID card from the government means they recognize my work."

Father Hermans, who came to Taiwan at the age of 30, said he never regretted moving there.

He said he became so emotional on receiving his Taiwanese ID card. "It's hard to describe how much I'm moved, I feel even closer to this land," he said.

Formerly known as Formosa, Taiwan is a sovereign and democratic nation with a population of 24 million. It never officially declared independence. Communist China still considers Taiwan as its integral part and has threatened to annex it militarily.

About 2 percent of Taiwan’s population are from ethnic aboriginal groups, collectively known as Austronesian people with linguistic and genetic ties to the people of the Philippines and other Polynesian groups, says the Guide to Taipei website.

About 35 percent of Taiwanese are Buddhists, 33 percent Taoists, 19 percent are non-religious, and 4 percent are Christians, according to official statistics.

The Catholic Church has about 300,000 members in one archdiocese and six dioceses with a significant number of Catholics being refugees from mainland China and migrants from Asian nations including Vietnam, the Philippines and Indonesia.