The leaders of a prominent opposition party have vowed to carry on pushing for political change in Thailand after a judicial decision to disband their party and bar them from politics for a decade.

Thailand’s Constitutional Court ruled on Feb. 21 that a loan of 191 million baht (US$6.1 million) by its billionaire founder Thanathorn Juangroongruangkit to the Future Forward Party was illegal.

The court decided to dissolve the opposition party and bar 16 of its executives from politics for 10 years.

Foreign governments, including those of the European Union and the United States, have raised concerns about the decision. Rights groups like Amnesty International have called the ruling politically motivated and called for it to be reversed.

Speaking at a news conference after the ruling, Thanathorn stressed that the demise of his party would not mean an end to its progressive political platform.

“Our journey is far from over,” the telegenic politician, 41, said. “Our goal is to plant the flag of our ideology onto the land. The only solution that is left for this country is to amend the constitution.”

He was referring to the country’s latest constitution, which was drafted by a military junta after it overthrew a democratically elected government in 2014. The constitution is widely seen by independent jurists as highly undemocratic.

The junta’s proxy government, led by former army chief Prayut Chan-o-cha, remains in charge after parliamentary elections held last year. After ruling as a dictator for five years, Prayut has retained power thanks to a coalition government cobbled together from a variety of pro-establishment parties.

Observers said last year’s elections, which were conducted according to the army’s own rules, were unfair and did not reflect the real will of most voters.

Despite the setback dealt to Future Forward by the highest court, its leader said he and his colleagues would carry on building a progressive movement outside parliament. 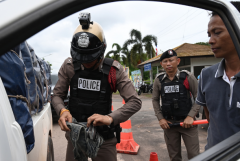 Their aim, he said, was to achieve radical democratic reforms in a nation where conservative military-allied forces have long dominated politics, often through military coups.

“This is the time to stand firm,” Thanathorn told a gathering of his party’s supporters. “Don’t change your mind. Don’t lose your fire. Don’t stop dreaming. The Future Forward Party isn’t just a political party but a spirit, a people and a journey."

Future Forward was set up in 2018 by Thanathorn and several like-minded young Thais.

At elections a few months later, in March 2019, the newly formed party generated a shockwave of surprise and optimism among many Thais by gaining six million votes and becoming the third-largest party in parliament.

The party’s progressive policy platform, which also sought to reduce the oversized influence of the army in politics, proved especially popular with young Thais.

At the weekend hundreds of students and young Thais rallied at Bangkok’s prestigious Thammasat University in support of Future Forward. They shouted slogans like “Long Live Democracy!” while carrying placards with similar messages.

“This is Thailand. There’s no justice in this country,” a young woman who graduated from another university told UCA News.

“The military and the rich people don’t want us [common people] to have a real future,” said another protester, a man in his early twenties who studies political science. “They want us to know our place and stay quiet whatever they do.”

Although his party has been dissolved, Thanathorn’s legal troubles are far from over. The charismatic politician and his fellow party leaders have nearly 30 other legal cases still pending against them, including a charge of sedition for participating in unauthorized street rallies. They could yet be sentenced to prison over some of these charges.

Last week some government-allied politicians called for Thanathorn’s elderly mother to be investigated over a larger plot of land she owns in a provincial area. They said her plot may have encroached on a public area.

Rights activists say cases like this show that Thanathorn and his fellow opposition politicians are being unfairly targeted in what they have called judicial harassment.

After the dissolution of Future Forward, Thanathorn’s nine-year-old daughter wrote a heartfelt email message to the United Nations, asking the international body to speak up in defense of the beleaguered politician.

“My dad doesn’t have the human right [of being] treated fairly by the law,” the girl wrote. “The problem is [the government is] trying to shut down my dad’s political party. And I don’t think that is fair to my dad. Please come and help me because my dad really needs it right now.”