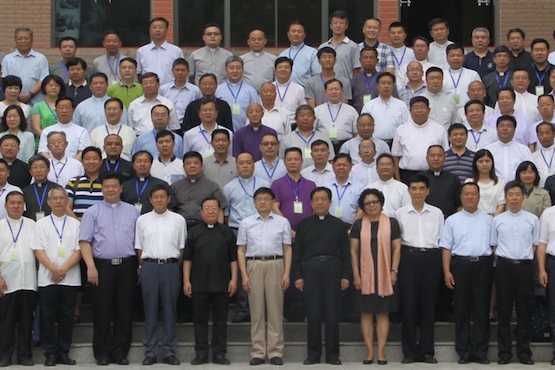 Participants of a five-day workshop held at a training center run by the State Administration for Religious Affairs in Beijing June 20-24. (ucanews.com photo)

A five-day workshop for Catholic clergy organized by China's State Administration for Religious Affairs (SARA) has received a mix response, according to several participants who were willing to talk to ucanews.com on condition of anonymity.

"There were old tunes without any new ideas," said one, who nonetheless felt that there was less pressure to conform than in previous workshops. "The political atmosphere was less tense and there was no panel discussion," he said of the June 20-24 workshop.

The keynote speeches at the Beijing event were made by Guo Wei, who is in charge of Catholic affairs at SARA and Wang Zigang of the United Front Work Department, a government agency that liaises with religious groups.

According to a source, these two officials reiterated the principle of a Chinese Catholic Church independent of Rome and spoke about the need to push forward with elections and ordinations of bishops. They also spoke on what is the "correct view" of China-Vatican relations, and how the church can strengthen the establishment of patriotic organizations.

After hearing Guo speak another participant felt gloomy and worried. "I feel like we are returning to past decades. They used the narrow viewpoints of the 1950s and 60s to analyze religion; looking at religion from the perspective of Marxism and the Communist Party," he said.

"Even when talking about the charitable services of religion, the officials only slightly touched upon the topic and only from an economic perspective. This makes me hardly optimistic," said the source.

Bishop Joseph Ma Yinglin, the Chinese Catholic Patriotic Association (CPA) sponsored Bishop of  Kunming Diocese, delivered a lecture where he maintained that for the Catholic Church in China "inculturation" and "sinicization" are one and the same.

Bishop Ma said the church in Beijing will vigorously promote "sinicization" and lead the church across the country to cultivate a deeper theological understanding of it, including how it relates to aspects of the church's liturgy, sacred music, architecture, literature and art.

About 150 people attended the workshop with five delegates from each province, except for Hainan, Tibet, Qinghai and Xinjiang, which have small Catholic populations. Participants included more than 30 bishops and personnel from the provincial CPA and church affairs commissions.

During the five-day workshop, some bishops and priests deliberately avoided concelebrating Mass with CPA-sponsored bishops who are not recognized by the Vatican.

It was also announced at the workshop that the National Congress of Chinese Catholic Representatives, the governing body of the CPA, would convene at the end of this year.

Similar workshops have been held for Buddhists, Taoists, Muslims and Protestants to explore the government's position towards religions, recently enunciated at a national conference on religion, held in Beijing from April 22-23.

Xi called for unity between religious and non-religious groups, the localization of "foreign" religions in order to make these more "Chinese" and prevent foreign infiltration, a strict separation between religion and the state and for party cadres to strengthen their supervision of religion.