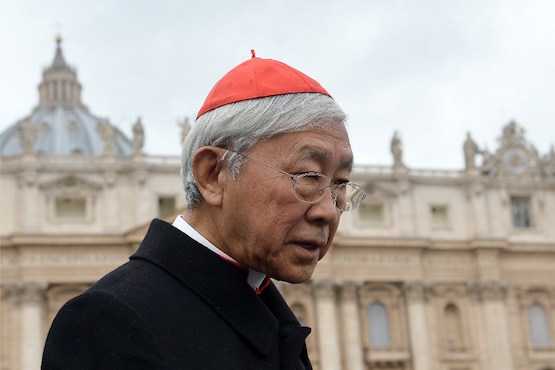 A file image of retired Cardinal Joseph Zen Ze-Kiun walking on St. Peter's Square after a pre-conclave meeting on March 6, 2013, at the Vatican. (Photo by Alberto Pizzoli/AFP)

Cardinal Joseph Zen Ze-kuin, 86, sits down for lunch. Chatting and smiling, he lists the options for main course at a private dining room in Bishop Lei International House, a church-owned hotel founded originally as a school for the De La Salle brothers.

It's perched high in the Mid-Levels of Hong Kong Island, high but not quite high enough to see out over the bay and toward China where controversy has been mounting over what Vatican sources — clearly the Holy See's communications office run by American Greg Burke — claim is a fairly imminent deal with Beijing on the appointment of bishops.

Cardinal Zen's trip to Rome weeks earlier to broach the matter with Pope Francis has raised the temperature of the debate and almost certainly triggered the Vatican's anonymous drop to several media outlets.

After crossing himself, saying grace silently and then crossing himself again, the bonhomie is parked for a bit and Cardinal Zen is straight down to business. Next to his bowl of soup ("I don't eat salad") is a printed copy of the recent comment piece by Father Michael Kelly, UCAN's executive director, titled: The Vatican-Chinese bishops kerfuffle.

But it was the subheading Cardinal Zen was focused on: "What is happening right now is no way unprecedented in recent Catholic history in China."

Cardinal Zen has made annotations in blue biro and, turning his sharp eyes on me as I try and broach the topic du jour, he lays his hand on Father Kelly's article and says: "I read this one and I find I have to put in order some facts."

"Firstly, what is happening is not normal, absolutely is novel — nothing similar has happened before," he says.

"During many years they had their own bishops, there was no communication between the church in China and the Vatican. So when the open policy started [under Deng Xiaoping from 1978] communication became easy, so many of the old bishops ordained illegitimately made representations to the Holy See through their friends. The Holy See made some investigations and approved some of them, though not all.

"They [the open church] also needed new bishops, so they used elections — actually fake elections — so the government chose people [to be bishops]. Some of these people were courageous enough to ask [the Vatican] for approval, so after some investigation by the Holy See ... they were legitimized.

"In the meantime they [the Vatican] ordained underground bishops and there was a special facility that they could ordain without approval and then seek approval later and have it ratified — this is before and immediately after the Cultural Revolution.

"Many underground bishops were arrested, so they needed to ordain their successor or even two successors. So when the Holy See got around to legitimizing them, there were often two bishops in the underground and the open church.

"In Rome the underground bishop is considered the bishop, while the one in the open church is only the auxiliary. That was the practice for several years under Cardinal Tomko [prefect of the Congregation for the Evangelisation of Peoples]. He was from Czechoslovakia, so he knew the communists, hey? So they came to know that many people in the open church were good people, so they legitimized people in the church and they encouraged people like me to go and teach in the seminaries in China.

"That was old history, then started the new period. In 2000, the government was worried that so many people contacted Rome, so they wanted people to know that would not be tolerated. So they wanted to ordain 12 bishops in Beijing at the same time the pope was ordaining 12 in Rome. It was a failure as only five showed up.

"The second occasion [in 2000] was for the canonization of the martyrs in China. The Communist Party asked all the bishops to sign a letter against the pope, and many signed the letter.

"You see of those five ordained on that occasion, three were legitimized very soon. By now Tomko was replaced by [Cardinal] Seppe, who was young (58) and had two experts, but he fired them! In the Holy See they very easily legitimize other bishops, so the people in the Chinese open church thought we can just ordain bishops and sooner or later they will be legitimized — so a very bad trend was started. Actually that happened for a number of years. But then it is not true that bishops are always ordained illegitimately then get legitimized.

"The Holy See just appeased the government, so the underground has been weakened. Now in the past years the underground priests have said 'I have no leader,' so they say go to the next door dioceses. They are eliminating communities.

"So the situation is very different. What is happening now is absolutely novel, it is a surprise, it is an unthinkable thing to ask a legitimate to retire, to resign to take in his place an illegitimate or excommunicated one. This never happened before. This is not normal business ... no, no, no, this is a new case."