Beijing using CCTV in churches to spy on Christians

Is a camera installation program in Zhejiang the start of a China-wide monitoring project? 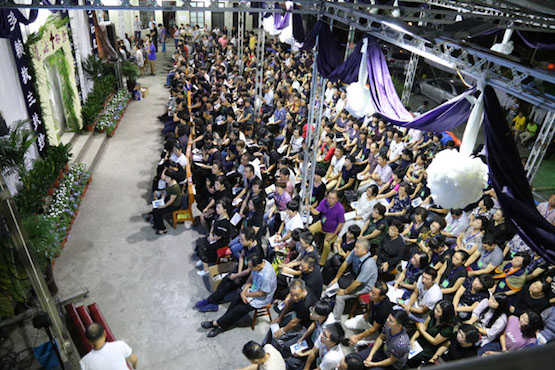 Catholics paid tribute to late Bishop Vincent Zhu Weifang of Wenzhou who died last September. The local authorities installed CCTV cameras outside the church compound to monitor the funeral after Catholics opposed the plan to install the monitoring devices inside the church hall. (Photo supplied)

China's ruling Communist Party has stepped up efforts to control the number of Christians by forcing Catholic and Protestant churches in the heavily Christian province of Zhejiang to install CCTV cameras inside and outside their buildings.

The government wants the underground and open Catholic communities in Zhejiang's Wenzhou Diocese to install surveillance cameras in their parish compounds by the end of March.

The authorities had already sent some technicians to install CCTV cameras starting in 2016 to "maintain social order," Father Francis, an underground priest, told ucanews.com. By March 15, all the parishes that Father Francis serves had received installation notices.

This moves comes on the back of a cross-removal campaign in the eastern coastal province in recent years where an estimated 1,700 crosses were removed from the top of Protestant and Catholic churches. Church venues have also been required to hang a national flag, put up a bulletin board for religious policy propaganda and to have a Communist Party member stationed there.

"Bishop Peter Shao Zhumin, an underground bishop who is not recognized by the government, felt helpless to resist the demand. As for the faithful, some feel angry but some are ignorant, not knowing or caring about the issue," Father Francis said.

Priests from the open community circulated a text message encouraging the faithful to bargain with officials but advised them to act with wisdom since the situation could vary.

"It is not only worthy of praise but encourages others to follow suit [and resist] … everyone's consensus is that no camera should be installed inside a church hall," the message said.

In some cases, officials promised that only one CCTV camera would be installed on top of a church wall or fence. Although this proposal is not ideal, it is currently the best way to remove the impasse, the message added.

The requirements to hoist the national flag and install CCTV cameras aims to "to better control the church," said Joseph.

Religious policy in China has tightened since President Xi Jinping became leader. Authorities have been suppressing and controlling the growth of Christianity in recent years to eliminate the influence of various denominations, he said.

According to China Aid, a Christian rights advocacy based in the U.S. CCTV cameras were installed "in almost all government-registered churches in Zhejiang to monitor the homily of the preachers, the number of church-goers and their activities."

Zhejiang province is home to some 2 million Protestants and 210,000 Catholics.