As we enter Holy Week, let us remember those parts of the world that are enduring their very own trials and floggings, their Via Dolorosa and Calvary.

There are those who are experiencing the very worst of man’s inhumanity to man — the Rohingya and Kachins in Myanmar, the Uyghurs in Xinjiang, the people of North Korea. But there are also those who until recently lived without fear, in relative freedom, who are now experiencing an almost daily hammering of nails into their way of life. In particular, let us think of Hong Kong.

For the first decade or so after the handover of Hong Kong to China in 1997, the territory’s freedoms and rule of law continued more or less unchallenged, and it functioned with a high degree of autonomy under the “one country, two systems” principle agreed between Britain and China. I worked as a journalist in Hong Kong for the first five years after the handover and, although I could see some very subtle concerns, by and large China lived up to its side of the bargain in respecting Hong Kong’s autonomy.

In the past five years, all that has changed. On a weekly, almost daily, basis another example of an assault on Hong Kong’s basic liberties emerges. Last week saw the latest: nine leaders of the Umbrella Movement, one of the most peaceful and disciplined mass protests anywhere in the world in recent times, were convicted on various charges of incitement to public nuisance, incitement to incite public nuisance and conspiracy to cause a public nuisance. They are likely to join the growing list of political prisoners in Hong Kong today. Hong Kong’s last colonial governor, Lord Patten, condemned the verdict as “appallingly divisive” and “vengeful.”

There are some who side with Beijing and regard the Umbrella Movement as a nuisance. And yet look at it this way: Beijing could not have had a more reasonable set of opponents in the Umbrella Movement leaders. Law professor Benny Tai, sociology professor Chan Kin-man and Baptist pastor Chu Yiu-ming stood alongside mild-mannered students and activists, all of whom asked to negotiate. These were not fiery extremists. The movement began as “Occupy Central with Love and Peace” — hardly Cultural Revolution language.

School students did their homework in tents while protesting. Student leader Alex Chow tried to travel to Beijing to talk. And in court on April 9, Rev. Chu preached one of the most inspiring sermons I have heard — worth meditating on during Holy Week.

He told the court: “I am a Christian minister committed to the service of God. I have resolved to live a life of friendship with the weak and the poor, praying that God’s justice be manifested on earth as it is in heaven and that the gospel of love and peace be proclaimed among the people. But today, old and gray, I find myself in the defendant’s dock, making a final plea as a convict. It looks so absurd, if not outright shameful, for a person holding holy office. And yet, at this very moment, my heart tells me that with this defendant’s dock, I have found the most honorable pulpit of my ministerial career. The valley of the shadow of death leads to spiritual heights. For decades, I have preached numerous sermons. Little could I anticipate that the one message for which preparation took me the longest time and the most heartfelt prayer, and which probably would reach the largest audience, is precisely this one delivered from the defendant’s dock.”

What did the demonstrators want five years ago? Nothing more than for China to live up to the promise it made before the handover, for universal suffrage in elections for the chief executive of Hong Kong. The deal Beijing offered instead made a mockery of that pledge, offering universal suffrage — but for candidates exclusively selected by China. As Martin Lee, founder of the Democratic Party of Hong Kong, said at the time: “What’s the difference between a rotten apple, a rotten orange and a rotten banana?”

The Umbrella Movement leaders asked repeatedly to talk with the Hong Kong government, to seek a way to bring the demonstrations to a peaceful and mutually agreeable conclusion, but they were rebuffed.

Since then, Beijing has tightened the noose on Hong Kong’s freedoms even further. Universal suffrage is a far distant dream — the focus now is on salvaging the basic human rights that still remain. And instead of negotiating, Beijing has pushed pro-democracy campaigners out of the mainstream political sphere. Elected legislators and candidates have been disqualified and a political party banned.

A new law will criminalize insults to China’s national anthem, even though the crime of “insult” is poorly defined. Mainland Chinese law is now applied at Hong Kong’s high-speed rail terminus so that if you are traveling to the mainland, you are subject to their laws before you even leave Hong Kong, in blatant violation of Hong Kong’s autonomy. A senior Financial Times editor, Victor Mallet, was expelled from the city, a year after I myself was refused entry. And Beijing’s reach has extended even beyond Hong Kong — in the U.K. I have received eight anonymous letters, sent to my neighbors, my mother and my employers, telling them to watch me and shut me up.

But even with all this, Hong Kong has not yet seen the worst. A new law that will allow Hong Kong to extradite suspected criminals to mainland China fills activists and business people alike with horror. In 2015 Chinese agents abducted Hong Kong booksellers who were publishing titles critical of the Chinese Communist Party, and they disappeared into detention in mainland China. Now, under the proposed new extradition law which has been dubbed “legalized kidnapping,” Beijing’s critics might be legally sent to the mainland to face trial.

It is one of the few issues that brings the business community and human rights activists together because businesses fear that they could be vulnerable too. If this new law is implemented, combined with possible new national security legislation that would criminalize “subversion,” then what remains of Hong Kong’s freedoms will be gone.

Hong Kong’s motto is “Asia’s world city.” It is one of the world’s most important financial centers. It has also been a hub for international media and human rights organizations in the region, and a window onto China. That window is now closing as Hong Kong is subsumed into the mainland as — in the words of a new U.K. parliamentary report — “one country, two systems” becomes “one country, one and a half systems.”

On March 30, Hong Kong Christians walked the Way of the Cross in prayer for the Umbrella Movement leaders facing jail. As we enter Holy Week, let us remember that Hong Kong may have further to walk in its Way of the Cross. But as we look to Easter and the hope of the Resurrection, let us also resolve to pray, and speak out, to urge the international community to act so that Hong Kong may one day rise again.

Benedict Rogers is co-founder and chairman of Hong Kong Watch. 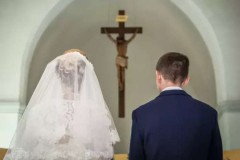 Fight's not over for Hong Kong democracy activists 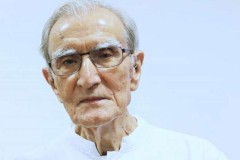