Freedom of press, thought, education and academia under threat 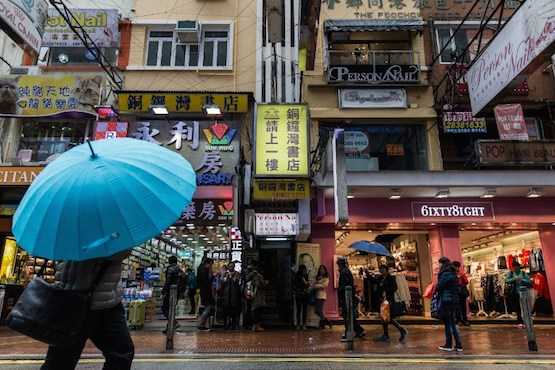 When students at Hong Kong University massed in protest on Jan. 26 at the growing interference in the management of their institution by the city's leaders, it was just the latest reaction to accelerating restrictions of freedom and increased censorship triggered by China's ruling Communist Party in Beijing.

The protests were held outside a regular meeting of the university's council, now being chaired by the new administrator, former Education Secretary Arthur Li.

He had been appointed by Hong Kong's ardently pro-Beijing chief executive, C.Y. Leung, after the council's initial choice, Johannes Chan, had been by knocked back by Leung.

The students were calling for reforms to the council's structure and they besieged council members after the meeting, who later claimed they were unable to leave the premises for several hours.

The council made no reply to the students' demands for dialogue, according to Billy Fung, president of the university's student union.

"The students' actions were very reasonable," Fung told reporters after the protest, which was criticized by university management. "There were more police on the scene than students, and I saw an officer pointing a pepper spray canister at students."

The appointment of Li was a clear case of waving a red rag at the bull, and most likely an intentional move. In selecting someone almost universally opposed, reaction on the Internet appeared to spark discontent.

As Stephen Vines said in the Hong Kong Economic Journal, this was a digital application of an age old tactic by the Communist Party to flush out its opponents by doing something they knew would be opposed.

But the clearly political appointment of Li was just the latest example in a series of events that have seen repression and censorship mount as the grip of Beijing begins to tighten in earnest around the former British colony.

The university protests came following weeks of increasing consternation over the disappearances of five people involved in the printing and selling of books critical of the Beijing regime. Hong Kong has long had a small but flourishing publishing industry that produces and distributes such books.

Until quite recently, they were available outside Hong Kong and at most newsagents there including such outlets as Page One and Relay at Hong Kong's international airport.

Many of these books were poorly researched, titillating and tabloid in style — what would be described as "potboilers" of little factual value. Some are more serious and targeted squarely at Beijing leaders.

In recent weeks the fate of the booksellers has begun to emerge. It appears they have been snatched or "renditioned" across the border to mainland China.

One, Gui Minhai, a Swedish citizen was magically spirited away from his holiday home in Thailand. There is no record of his exit from the country by Thai immigration officials, Chinese authorities now claim.

Another, Lee Bo, holds a British passport and was said by Chinese authorities to have come to the mainland. Again, no immigration records confirm that he has left Hong Kong or that he is "helping police with inquires."

The sum total of these actions point to the very rapid collapse of the "one country, two systems" formula agreed with the British that would hold for 50 years after the 1997 handover of Hong Kong to Beijing.

The rendition of the booksellers, legal experts have noted, transgresses Hong Kong's Basic Law. China's state security apparatus now apparently feels emboldened to simply ignore it. It has all the marks of the dark hand of Chinese leader Xi Jinping's concerted campaign against critics of all stripes, both inside and outside the party. As he consolidates power and crushes hard earned freedoms, his reach now extends to Hong Kong, Thailand and wherever else Chinese-born critics might be.

No one, it seems, is safe. Just how long before human rights lawyers, nongovernmental organizations and religious groups in Hong Kong speaking up against Beijing's extralegal activities are targeted is anyone's guess. But the evidence is increasingly strong that they will be hit.

In the meantime the Fourth Estate too has been targeted. Two editors of Chinese-language newspapers have been the victims of brutal attacks, apparently by triads, most likely at the behest of Chinese authorities, although it is unclear at which level.

Whatever the case and whoever is making decisions and choosing targets, all these cases are naked fear mongering of the highest order. Or, as the Chinese put it, killing a chicken to scare the monkeys.

In a further development that augurs poorly for press freedom, the city's previously well-respected English daily, The South China Morning Post, was recently sold to Alibaba, the wildly successful mainland-based e-commerce business owned by billionaire Jack Ma, who has close ties to Beijing.

In recent years, a range of longtime columnists and journalists known to be critical of Beijing have gradually left the paper. Its coverage of China remains, with its unrivaled coverage due to significant journalistic resources — native Chinese speakers — committed to mainland coverage.

But some days its front page and/or editorial column could have easily be lifted from the China Daily — the English-language newspapers owned by the party. Under Ma we can expected more of this and the closing of a vital window into China.

At long last the United States has spoken out on this issue and the rest of the law-abiding international community must join them and tell Beijing this is simply not on.

"These cases (of disappeared publishers) … raise serious questions about China's commitment to Hong Kong's autonomy under the 'one country, two systems' framework, as well as its respect for the protection of universal human rights and fundamental freedoms," John Kirby, U.S. State Department spokesman said on Feb. 1 "We urge China to clarify the current status of all five individuals and the circumstances surrounding their disappearances."

There's an ill wind blowing in Hong Kong and the storm warnings are out for a typhoon ahead.

Michael Sainsbury is deputy editor for East Asia for ucanews.com and a regular contributor to Global Pulse Magazine, where this article first appeared on Feb. 2.