Beijing takes next step in revising regulations on religions 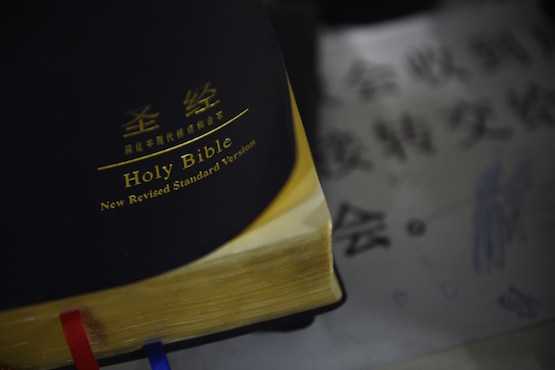 A Bible as seen after an underground church Christmas Eve service at an apartment in Beijing in 2014. (Photo by AFP)

A draft bill to amend the Regulation for Religious Affairs (RRA) was released by the Chinese government for a one-month public consultation on Sept. 7.

This follows an extensive build-up over the last year that had the involvement of the highest levels of the Chinese government including President Xi Jinping.

The amendments are part of the overall strategy Xi has to reinforce the control exercised by Communist Party in China over religions, minorities and any potential source of social disruption. It is allied to the continuing crackdown on corruption whose thriving threatens the legitimacy of the Party's rule.

The public consultation, which runs until Oct. 7, was announced on the website of the State Council Legislative Affairs Office.

This set of amendments to the laws regulating religion has introduced 26 new articles, an increase from 48 to 74.

The current RRA — in force till these amendments — was promulgated in 2004 and came into effect in March 2005. The 2004 document followed a party summit in 2001 and was to replace the Regulation on Administration of Sites for Religious Activities promulgated in 1994.

In July 2015, Wang Zuoan, director of the State Administration for Religious Affairs, stressed in a forum on religious work that amending the RRA was the main task for the department in 2015.

Wang said in the meeting that the RRA is "a sign of development in legal constructions for the religious sector." The 2004 ordinances were no longer suitable and had to be amended, according to Christian Times, a Protestant news website in China.

Intensive training to prepare religious officials for the amendment is underway.

On the same day the draft was released, Yu Zhengsheng, one of seven standing committee members of the Politburo, spoke in a seminar and insisted on the need for "sinicizing" religions in China and using core socialist values to lead religious development in the country.

The seminar for provincial officials was a follow-up to the National Conference of Religious Work presided over by Xi in April.

Yu said the officials need a better understanding of the rule of law in relation to religious issues and on how to resist foreign infiltration of religions.