US imposes further sanctions on individuals among the Chinese territory's authorities 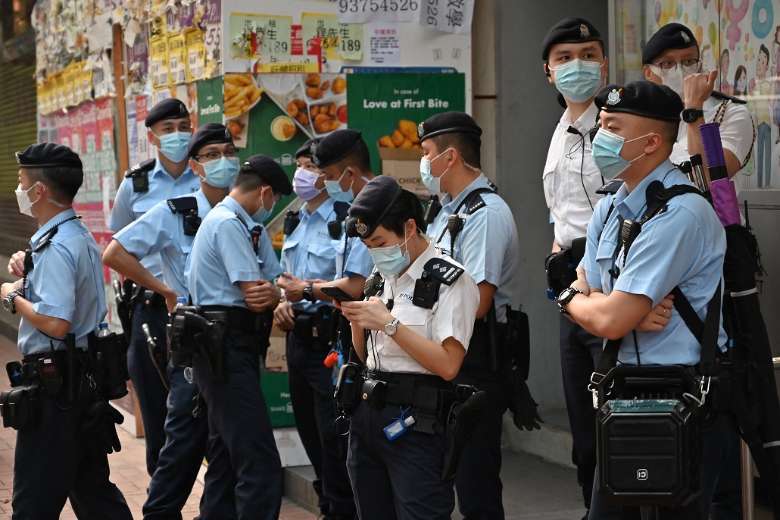 Police gather as the League of Social Democrats prepare to hold a protest against Beijing’s plan to change Hong Kong’s electoral system in Hong Kong on March 17. (Photo: AFP)

Moves by the central government in China to ensure that only its people get to govern Hong Kong have erased the last vestiges of self-rule as the United States listed another 24 Chinese individuals for sanctions in response to Beijing’s political incursion and subsequent crackdown.

Additions to the list, initiated under former president Donald Trump, take the total number of people sanctioned by the US to 34 as President Joe Biden signals a tougher approach. Foreign banks have also been warned not to do any business with them.

“Foreign financial institutions that knowingly conduct significant transactions with the individuals listed in today’s report are now subject to sanctions,” said US Secretary of State Antony Blinken on March 17.

China acted with “predictable fury” as their diplomats launched a propaganda campaign around the region decrying the response while ignoring promises made to the Hong Kong people guaranteeing basic rights and self-rule for 50 years when Beijing assumed control of the territory in 1997.

It also accused Japan of colluding with the US to destabilize Beijing in the region.

Beijing passed a resolution to ensure only “patriots” would govern Hong Kong on March 11 in the National People’s Congress (NPC) at the end of its annual plenum, which would enable a pro-Beijing panel to vet and select candidates for the territory’s elections.

Details of the resolution are to be sorted out by the Communist Party’s standing committee, which authorities described as a “new democratic electoral system with Hong Kong characteristics.”

According to government mouthpiece Xinhua, the number of members on Hong Kong’s election committee charged with choosing the chief executive will be increased to 1,500 from 1,200 and be empowered to elect some members of the legislature.

The committee will also nominate candidates to stand in legislative races, while numbers in the Legislative Council will rise to 90 from 70 under the new laws, which were divided into nine parts and included 31 amendments.

Beijing says 70 percent of Hong Kongers supported the amendments when 60 percent of voters backed democrats in the 2019 district council and more than a quarter — about 2 million people — protested Beijing’s anti-extradition bill in the same year. Chief Executive Carrie Lam, a Catholic, was enthusiastic about the changes, insisting they would improve the current system while rejecting claims that the laws would target democrats by favoring pro-Beijing candidates.

“It is designed to ensure that whoever is administering Hong Kong is patriotic, and this is only right in terms of political ethics,” she said.

Lam, who has already been sanctioned by the US, has said she no longer has a bank account and instead sits on “piles of cash” at home.

Writing in the Hong Kong Free Press, Chris Yeung, chair of the Hong Kong Journalists Association, said the Chinese Communist Party had decided against keeping the city’s partial democracy and a gradual move towards full universal suffrage as envisaged in 1997.

“In Hong Kong, Beijing’s hardball tactics have alienated the mainstream, inflicting irreparable damage on the trust and confidence among the people and the international community towards China,” he said.

US sanctions were announced as officials in Beijing were preparing for their first face-to-face talks with the Biden administration in Alaska amid the deterioration in relations between the two nations.

“This action further undermines the high degree of autonomy promised to people in Hong Kong and denies Hong Kongers a voice in their own governance,” he said.

More than 100 people have been arrested under new security laws, with many charged with advocating foreign sanctions. They include Jimmy Lai, the pro-democracy media proprietor who is in detention awaiting trial.

Protests in Hong Kong are rare and have been restricted to four people, with the government citing the Covid-19 pandemic as justification, a far cry from the consistent and sometimes violent rallies which erupted two years ago in response to Beijing’s political intrusions.

As a result of current laws, four members from the League of Social Democrats (LSD) marched through Wan Chai business district on March 17 to the Convention Centre where officials were hosting a three-day event to solicit "patriotic" opinions on the law.