This photo taken on April 19, 2015 shows Uyghur men gathering outside for afternoon prayers at the Id Kah mosque in Kashgar, in China's western Xinjiang region. Chinese authorities have restricted expressions of religion in Xinjiang in recent years such as wearing veils, fasting during Ramadan and young men growing beards. (Photo by Greg Baker/AFP)

Alleged gross human rights abuses are piling up in the Xinjiang Uyghur Autonomous Region as the holy month of Ramadan continues amid disturbing crackdowns on minority Muslims by the Chinese government.

The allegations that have surfaced since the start of Ramadan have included forcing Muslims to eat during the daytime, confiscating Qurans, and forcing restaurants to stay open while restricting access to mosques.

Authorities in Xinjiang have also banned anyone up to 16-years-old from having names that are perceived to be religious, amid fiery pro-communist rallies across the province attended by millions at the height of the month of fasting.

"It seems Beijing won't rest until it has baselessly restricted every aspect of Uyghurs' lives — how they can worship, when they can eat, what they can name their children," Sophie Richardson, China Director at Human Rights Watch, told ucanews.com.

"Such a strategy is bound to deepen alienation, and until Beijing reverses course its claims to being a global leader or a country governed by the rule of law ring utterly hollow," Richardson said.

The continued abrasion of Uyghur culture in Xinjiang can sometimes be subtle. According to the official state news agency, Xinhua, on June 16, the Chinese government will soon dispatch 4,000 additional Mandarin teachers there to "support local education." According to Xinhua, there are already 1,500 government teachers present in Xinjiang and "bilingual education has made remarkable progress."

"From many different sources, it looks like restrictions on Uyghurs who want to pray and fast for Ramadan have only increased this year.… These are egregious violations of freedom or religion," William Nee, China Researcher at Amnesty International, told ucanews.com.

Efforts to streamline Xinjiang with the central government's so-called core values are becoming especially intense amid the roll out of Chinese President Xi Jinping's One Belt One Road initiative, an ambitious project aiming to link Beijing with Pakistan. Xinjiang is a major transportation hub for what the government calls a revival of the ancient Silk Road. Restrictions for Muslims in Xinjiang were significantly ramped up in April, when the government pledged to stamp out so-called "extremism."

"The government defined extremism in incredibly sweeping terms, such as having abnormal beards, wearing veiling, naming children with Islamic names, refusing public services such as TV or radio broadcasts, and encouraging others not to accept national policies," Nee said.

The new regulations were promulgated under Xinjiang Party Secretary Chen Quanguo, who previously held a five-year position in the Tibet Autonomous Region. Earlier this year, he held a massive anti-terror rally and passed an edict forcing personal vehicles in the province to install GPS tracking devices. 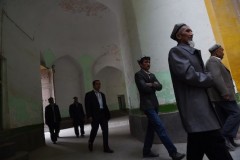 "These regulations also give the authorities a much broader mandate to interfere in people's lives — especially as it might pertain to religion — in order to supposedly combat 'extremism,'" Nee said.

On June 16, it was revealed authorities had fined at least 100 Uyghurs for breaking the government's restrictions on observance of the religious fasting month. A Muslim Kazakh imam was reported to have died in police custody on the same day.

Earlier this month, it was also reported that a local government campaign in Hotan (Hetian) installed Party cadres in Muslim homes to prevent fasting and praying — allegations also surfaced of forcing civil servants there to sign contracts refusing to observe Ramadan, in a bid to set examples for others.

Muslims in Hotan were also allegedly forced to collectively watch communist films on Fridays — which is typically reserved for prayer at the mosque — and play highly active sports despite fasting.