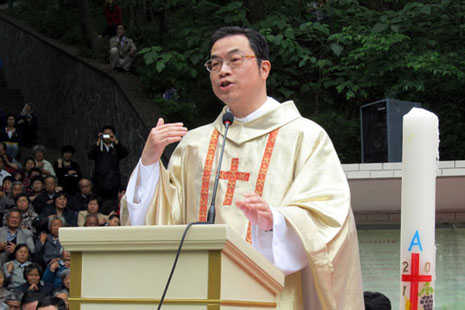 Joseph Liu Yuanlong, a vice chair of the Chinese Catholic Patriotic Association (CCPA), confirmed that the Association and the Bishops’ Conference of the Catholic Church in China (BCCCC) have decided to revoke his approval letter as “coadjutor” bishop and dismiss him from all posts in the CCPA and BCCCC.

They also called on Shanghai diocese to “deal with Ma in a serious manner,” he said.

Sources at the Beijing meeting told ucanews.com the 45-year-old prelate had violated the country’s regulations on religious affairs and BCCCC rules in relation to episcopal ordination.

Among the six “charges” laid against him, they accused Bishop Ma of deliberately preventing an illegitimate bishop and two other participating bishops from laying hands on his head and forbidding them from receiving Holy Communion, sources said.

“They also charged him with not publicly distinguishing whether he is coadjutor or auxiliary bishop, a title given by the Pope, and that the oath was incomplete as a result of deliberate damage to the sound system,” sources said.

In addition, they blamed him for the absence of many diocesan priests and nuns at the ordination and determined the declaration he made in his thanksgiving speech would have a damaging influence on others, the sources said.

Church observers outside China warned the government-sanctioned bodies might have violated Church law.

“Appointment and dismissal of a bishop comes only from the Pope. One bishop has no authority to suspend another, and neither the bishops’ conference has such power,” said a canonist who asked not to be named.

“Everyone knows who is behind this act and is using our Catholic institutions and our bishops for other purposes at this very sensitive time for China’s new leaders,” he said.

“The Communist Party should avoid such political games that create confusion among the clergy and provoke tension among Catholics around the world,” he added.

Many faithful have condemned the decision against Ma since news of the punishment emerged on Monday. Some rejected the validity of the revocation and the legitimacy of the BCCCC, which is not recognized by the Vatican, while others expressed solidarity with Bishop Ma.

Some people blamed Shanghai diocese and Bishop Aloysius Jin Luxian, who heads the “open” community.  The prominent bishop, who is an honorary president of the CCPA and BCCCC, has made no public statement on the controversial ordination since July.