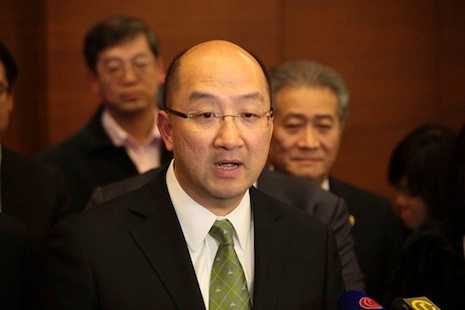 Beijing has scrapped plans to have Hong Kong host the Asia-Pacific Economic Cooperation (APEC) meeting of financial ministers, according to a written notification sent yesterday.

The meeting, scheduled for September 10-12, will now be hosted in Beijing. In a press release issued by the Hong Kong administration, the reason given for the change was that Beijing would be better able to facilitate the broad range of events scheduled.

Speculation began to spread, however, that the change of venue was related to the Occupy Central movement, which has plans to close down the central financial district in support of political reform.

Raymond Tam, secretary of constitutional and mainland affairs, denied any connection and said there was never any overlap between the two events.

However some observers remain unconvinced, citing the fact that preparations for a similar APEC meeting in August in Macau continue to move forward.

Ding Wai, a professor of international relations at Hong Kong Baptist University, said he believes “Beijing does not want media focus shifting from the meeting to possible protests”.

He added: “Rallies related to press freedom, conflicts between Hong Kong residents and mainland tourists, and Occupy Central have haunted the city since the beginning of 2004.”

Willy Lam Wo-lap, another political observer, said Beijing’s decision to move the APEC meeting signaled a further deterioration between the mainland and the Special Administrative Region.

“Its underlying meaning is Beijing will not make concessions on political reform,” Lam said.