Muslims in Xinjiang region can no longer use names such as Mecca, Imam and Saddam A Uighur woman holds her baby in a night market in Hotan, in China's western Xinjiang region, in this April, 2015 file photo. Authorities have reportedly banned dozens of Muslim baby names that have religious meaning. (Photo by Greg Baker/AFP)

Chinese authorities in the northwestern region of Xinjiang have banned dozens of baby names with religious meanings that are widely used by Muslims elsewhere in the world.

Sources in Hotan, in the southern part of the region, had previously detailed a list of banned names in 2015, but the ban now appears to have been rolled out region-wide, Radio Free Asia reported.Islam, Quran, Mecca, Jihad, Imam, Saddam, Hajj, and Medina are among dozens of baby names banned under ruling Chinese Communist Party's "Naming Rules For Ethnic Minorities," an official confirmed last week.
Donate to UCA News with a small contribution of your choice
An employee who answered the phone at a police station in the regional capital Urumqi confirmed that "overly religious" names are banned, and that any babies registered with such names would be barred from the hukou household registration system that gives access to health care and education."You're not allowed to give names with a strong religious flavor, such as Jihad or names like that,' the official said. "The most important thing here is the connotations of the name ... [it mustn't have] connotations of holy war or of splittism [Xinjiang independence]."Asked if names of Islamic scholars were acceptable, the employee replied: "Get him to change it; it's the sort of thing that [could be regarded as] promoting terror and evil cults."Asked if Yultuzay, a reference to the star and moon symbol of the Islamic faith, was acceptable, he said: "Actually the star and moon are a pagan symbol.""[Mecca] would be a bit over-the-top ... I don't think you could call someone Saddam, either," he said in response to queries on those names.
Related News 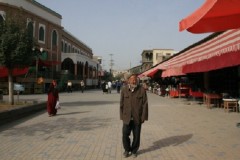 Beijing's response to the 'globalization of Islam'