Beef continues to cause unrest in Kashmir 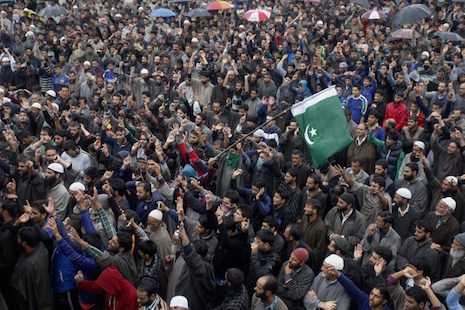 Kashmiri villagers shout pro-freedom slogans during the Oct. 19 funeral of a truck conductor killed in a petrol bomb attack. (Photo by AFP)

Protests against a beef-related killing continue in India's Muslim-majority Jammu and Kashmir state, where an 18-year-old man died after he was set on fire by a mob over rumors that he was transporting cows for slaughter.

Zahid Rasool was set ablaze by a mob after he jumped out of his truck after it was attacked with a petrol bomb in Udhampur Oct. 9.

His subsequent death on Oct. 18 has led to widespread violence, protests and closures in the state, forcing the administration to impose curfews in some areas.

Hindus, who make up most of India's population, consider cows sacred, while Muslims slaughter cows for food.

The Indian government, led by the pro-Hindu Bharatiya Janata Party (BJP), is presently pushing for a nationwide ban on cow slaughter. Most Indian states, including Jammu and Kashmir — India's only Muslim-majority state and where the BJP is part of the ruling coalition — have tightened laws banning the sale and consumption of beef.

Three people in the past month have died after being attacked by right-wing Hindus for allegedly slaughtering cows or eating beef.

Jammu and Kashmir, wracked by years of separatist violence, has been in the news lately because BJP lawmakers in the state assembly beat a Muslim politician after he served beef at a private party.

Separatists are accusing the state government of encouraging Hindu hard-liners to attack Muslims.

Jammu and Kashmir's chief religious cleric and a separatist leader, Mirwaiz Umar Farooq, is also blaming the government. "The government is allowing such incidents to take place. There is no safety for the common man in Kashmir," he said.

Rasool's father, Ghulam Rasool Bhat, has refused a government offer of 500,000 rupees (US$7,600) as compensation for his son's murder.

"His death has crippled me from within. There is darkness from all sides," Bhat told ucanews.com. "The government has given a free hand to Hindu fanatics to go scot-free," he said.

Police have arrested nine of the attackers after they were identified from CCTV footage.

However, Balbir Ram Rattan, the spokesman for the Bharatiya Janata Party in the state, told ucanews.com that "leaders in Kashmir who through their own vested interests" were responsible for the tragedy.