Philippine church, rights activists must get among poor to turn opinion against president's deadly campaign 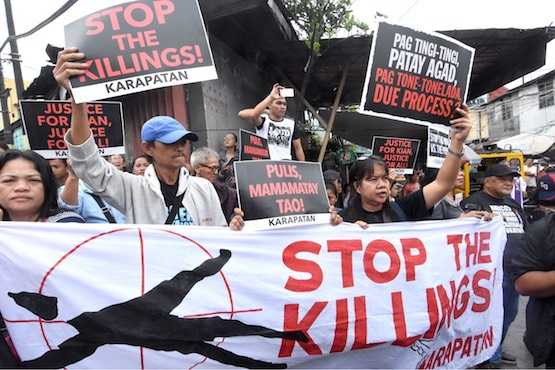 Activists and rights workers in the Philippines are on the receiving of President Rodrigo Duterte's tirades and social media attacks by his supporters. (Photo by Angie de Silva)

In the Philippines, human rights advocacy can be dangerous to your health.

President Rodrigo Duterte is the head troll of an army that utilizes threats, insults and lies to swamp calls to rethink a drug war that has killed thousands of Filipinos.

Duterte has jailed Senator Leila de Lima, a former justice secretary and fierce critic of his campaign. His aides unleashed torrents of salacious insults, painting the senator as a loose woman and sexual predator, uncaring of their own reputations as serial philanderers.

The president has called another critic, Senator Antonio Trillanes, as a "political ISIS," a reference to the Middle East terror group linked to the almost four-month conflict in the southern Philippines.

The goal is simple: Silence the critics. The strategy is multi-pronged and reflective of Duterte's drug war.

There are the official, incendiary statements, calculated to disrupt any scandalous or embarrassing narrative and put critics on the defensive.

Duterte uses words as a sledgehammer, whether the target is former US president Barack Obama or nameless indigenous youth.

Vigilantes pick up where official messages stop. Officials wash their hands of the gore even as they gush praise for their force multipliers.

But the noise doesn't just come from the government's social media influencers. Sixteen million Filipinos voted for Duterte. The president retains good ratings, though not much higher than what his predecessor, Benigno Simeon Aquino III, achieved in the same time frame.

Even as the number of killings rose, people defended the president. Many echo Duterte's spin — the good don't get killed.

That flies in the face of reality. The last four teenagers killed in as many weeks did not have bad records. Three were hard-working boys from urban working class families with aspirations for upward mobility. Police shot two of them, giving the tired excuse, "they fought back." The third, only 14 years old, was found trussed and butchered like a pig.

The fourth, an indigenous youth and former evacuee of war, was shot dead by paramilitary forces as he farmed a family cornfield.

A year of bloodletting has taken the lives of 40 children. With every remonstration, Duterte and his hordes unleash roars. Those who complain, they say, must be in the pay of drug lords.

Church leaders and rights workers are scrambling to be heard amid the strident cheers greeting every Duterte tirade.  Bishops have issued pained homilies and statements, wondering what has happened to Asia's most populous Catholic nation.

Frustration makes many rights advocates see the people as the enemy.

Cruel comments, mostly from supporters of traditional parties that make up the small opposition, call the killings payback for the poor who came in droves during Duterte's campaign sorties.

Father Benjamin Alforque of the Missionaries of the Sacred Heart believes it is a dead-end argument. On the receiving end of centuries of institutionalized oppression, the poor saw themselves reflected in Duterte, who created an image of an outsider seeking radical socio-economic change.

The poor, Father Alforque says, are turning away slowly from their idol as he abandons many of his pledges to divert resources to security issues.

Those who work at the grassroots say it will take patience and sustained examples of solidarity to wean the poor away from idolatry.

An activist with the urban poor group Kadamay says they struggled for a year to educate people on human rights. In many communities, other crimes dropped even as state-sponsored killings rose.

The Duterte trade-off was a more peaceful life for the poor until family and friends died. Even then, there was ambivalence — many of the slain did have records as drug addicts who preyed on neighbors.

Yet in the last year, Kadamay quadrupled its membership. It focused first on other survival needs like housing and bagged major victories, forcing the government to cede thousands of unoccupied homes to displaced urban poor.

That was the entry point, they said. Now Kadamay mobilizes a thousand folk at rallies against extra-judicial killings.

There is no mystique, says Kadamay. You need to be present in the lives of the poor.

Father Alforque says a church that has forgotten its ties to the poor, preferring cozy relations with political powers since the 1990s, needs to regain the trust of the margins.

Cardinal Luis Antonio Tagle of Manila, has taken the first, small step, ordering priests, layleaders and parishioners to visit every wake for a victim of Duterte's drug war.

It seems such a small thing. But where the agents of death stalk nightly, a physical presence can spell the difference between isolation that saps the spirit and a renewal of courage when the country needs it most.