Despite end to Marawi hostilities further outbreaks of terror in Mindanao are likely, they say 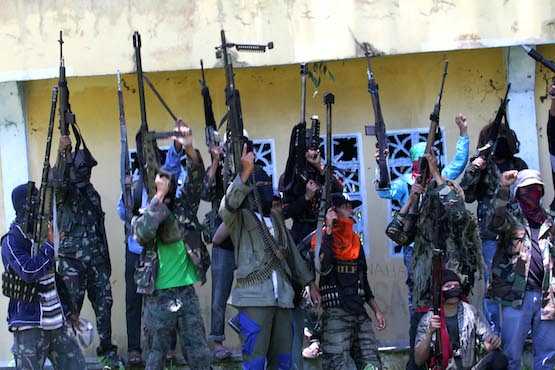 Members of the Bangsamoro Islamic Freedom Fighters and the Abu Sayyaf Group that pledged allegiance to the so-called Islamic State continue to pose a threat to the southern Philippine region of Mindanao. (ucanews.com file photo by Mark Navales)

Radical extremism remains a threat in Mindanao despite the Philippine government declaring on Oct. 23 an end to months of armed clashes with Islamic State-inspired gunmen in the city of Marawi, according to a senior churchman.

Cardinal Orlando Quevedo of Cotabato said there are still groups in the southern Philippines that carry an "extremist ideology" and "are thinking of a caliphate" which poses a threat to the region.

"A caliphate will probably not exist in Marawi but could rise somewhere else," the prelate said at the end of a gathering of Mindanao church leaders in Davao on Oct. 20.

He said groups like the Bangsamoro Islamic Freedom Fighters and Abu Sayyaf, which claimed allegiance to the so-called Islamic State group, continue to recruit young people in the region.

Auxiliary Bishop Broderick Pabillo of Manila agreed with Cardinal Quevedo, saying that the public should continue to be vigilant against "terrorism and violence."

"The fight is not only against [the terrorist leaders who died] but against terrorism and violence from whatever quarter," said the Manila prelate.

Father Jerome Secillano of the bishops' conference’s public affairs committee said Filipinos should always be on alert for any terrorism threat.

"We just need to be constantly alert because the deaths of these terrorists do not mean the end of terrorism in the country," said the priest.

"Let's just be prepared for any eventuality [because] terrorism is everywhere," he said.

"I am happy that the siege is over and people can go back to their respective places," said the prelate. "Sad because there is practically no house to go home to for the residents," he added.

The bishop said the rehabilitation of the city should now proceed at "dizzying pace" although it is going to be "traumatic" for people to see their former homes gone.

On Oct. 23, the Philippine military ended combat operations against terrorist gunmen who had occupied Marawi since May 23.

Defense Secretary Delfin Lorenzana said the government has "defeated terrorism in the Philippines."

"In crushing thus far the most serious attempt to export violent extremism and radicalism in the Philippines and in the region, we have contributed to preventing its spread in Asia," he said.

Lorenzana however admitted that, "tactical and strategic gains will not annihilate the ideology completely."

Armed forces chief General Eduardo Ano said the end of the fighting would signal the return of hundreds of thousands of displaced residents.

He said the conflict in Marawi can serve as a lesson to people, noting that the fight against terrorism needs the support of the public.

With the fighting in Marawi over, Father Secillano said, "it's high time that martial law in Mindanao be lifted."

Philippine President Rodrigo Duterte declared martial law across Mindanao immediately after the terrorist attack on May 23.

"It is high time to end martial law and the president should be duty bound to do it [as soon as possible]," said the priest.

But Cardinal Quevedo said church leaders in Mindanao have not yet decided to ask the president to lift martial law.

"We have many fears, but at present we simply do not have solid and sufficient facts to absolutely reject martial law as morally reprehensible," said the Mindanao prelate.

He agreed, however, that martial law in the southern region "must be temporary."