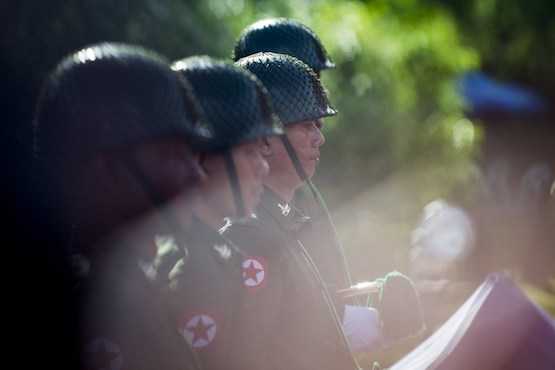 Myanmar soldiers attend a ceremony in Yangon on July 19, 2016. Government soldiers have been accused of killing three Kachin men in the country's north. (Photo by Ye Aung Thu/AFP)

A Baptist Church leader has called for proper investigations into the deaths of three Kachin men allegedly killed by government soldiers in Myanmar's conflict-torn Kachin State.

"We want truth and justice for the victims and their families so we look to the government to investigate into it according to the rule of law," Rev. Hkalam Samson, general secretary of the Kachin Baptist Church told ucanews.com.

The three men were returning from collecting firewood 4 kilometers from their camp when they were reportedly arrested by government soldiers on May 25.

Myanmar's military said May 30 that they would probe whether the soldiers killed the men. Kachin State police are also conducting investigations.

The Kachin Baptist Church and the families of the deceased will hold prayer meetings for the three men in Banmaw Township on June 8.