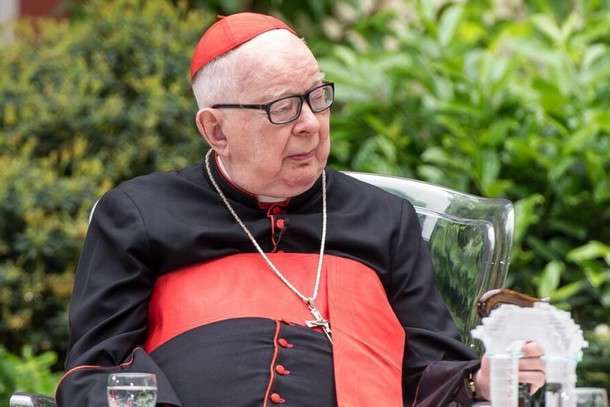 A retired Polish cardinal disciplined by the Vatican in early November has been hospitalized and remains unconscious, Polish media reported Nov. 10.

Cardinal Henryk Gulbinowicz, the 97-year-old retired archbishop of Wroclaw, was banned from all public appearances and ordered to compensate his alleged victims after being investigated for sexual abuse, the Vatican nunciature in Warsaw said Nov. 6.

The announcement, which did not provide details of why the steps were taken, followed an 18-month investigation into abuse claims. Accusations against the cardinal were made in a May 2019 TV film, Just Tell No One, by a former Catholic student from Legnica, Poland.

Cardinal Gulbinowicz headed the Archdiocese of Wroclaw for 28 years until his 2004 retirement. In the past, he was widely praised for his human rights advocacy during Poland's communist era.

On Nov. 10, Polish broadcaster TVN24 aired a documentary suggesting that Krakow Cardinal Stanislaw Dziwisz, former secretary to St. John Paul II, covered up sex abuse by priests in Poland and elsewhere. The incidents included abuse of minors by the late Father Marcial Maciel Degollado, founders of the Legionaries of Christ.

In a statement posted on the website of the Polish bishops' conference, its president, Archbishop Stanislaw Gadecki of Poznan, said he hoped any doubts raised in the documentary would be investigated by the Vatican. He also pointed out that the Polish church was "grateful to the cardinal for his many years of service alongside St. John Paul II."

The allegations against the two cardinals were the latest in Poland's Catholic Church. In a March 2019 report, church officials conceded there had been "a certain ignorance" of canonical rules against abuse, as well as "differences of reliability" between dioceses and religious orders. The officials said abuse prevention programs have been introduced and diocesan staff have been trained to combat abuse and assist victims.

On Oct. 17, Pope Francis accepted the resignation of Bishop Edward Janiak of Kalisz after claims he had violated Polish law and Vatican guidelines by brushing aside sexual abuse allegations against local priests.

In February, Auxiliary Bishop Jan Szkodon of Krakow was suspended and ordered to leave his see after being publicly accused by the Gazeta Wyborcza daily of abusing an underage girl.

An investigation of Bishop Andrzej Dziuba of Lowicz is underway for failing to report alleged clergy sexual abuse, and the Vatican nunciature said Nov. 4 it had commissioned an inquiry into retired Archbishop Slawoj Glodz of Gdansk, who was publicly accused by 16 local priests in October 2019 of covering up claims of sexual harassment.