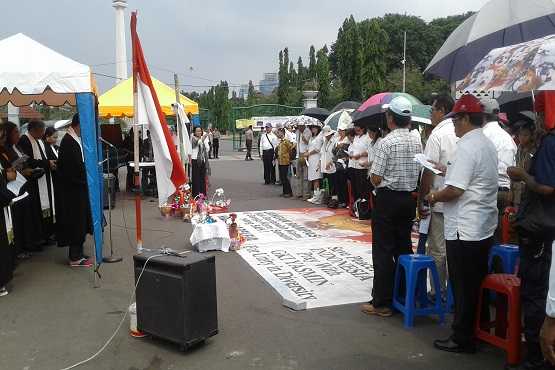 Members of the Yasmin Indonesian Christian Church in Bogor and Batak Society Christian Church (HKBP) of Philadelphia in Bekasi, West Java, hold an Easter service outside the presidential palace in Jakarta on April 16. (ucanews.com photo)

Indonesian Protestants, whose churches remain sealed by authorities in West Java, celebrated their fifth Easter in protest outside the presidential palace where they are hoping the president lifts a banning order preventing them from holding services in their own houses of worship.

Some 300 members of the Yasmin Indonesian Christian Church from Bogor city and the Batak Society Christian Church (HKBP) of Philadelphia in Bekasi district attended an Easter service on April 16.

Both churches say they are legally registered but are being persecuted by local authorities who refuse to allow them to worship in their own churches, after citing opposition by local Muslims.

"We are facing serious religious divisions in Indonesia, I hope the resurrection of Christ unites us," said Reverend Stephen Suleman, who led the Easter service.

Bona Sigalingging, a Yasmin congregation spokesman, said, although an agreement has been struck with the new major of Bogor to construct a mosque next to their church, nothing has been forthcoming so far.

"We will hold him to his promise," he said.

Despite winning a legal battle in the Supreme Court, the Christians said the previous mayor refused to allow the church to reopen because of pressure from hard-line groups.

The Yasmin church was shuttered in 2008.

In protest the congregation, along with HKBP, began organizing Sunday services outside the presidential palace in 2012.

HKBP said that they have held service for five years in front of the presidential palace each second week in a month joint to the Yasmin Indonesian Christian Church.

They too are hoping for President Joko Widodo to intervene after a ruling by the Supreme Court telling the local authorities to award them a building permit for their church fell on deaf ears.

Azriana, a commissioner of National Commission on Violence against Women, also attend the event.

"We don't see the state supporting our struggle for our rights," the commissioner, who like many Indonesians goes by one name, told the gathering.

After the service, Easter eggs were distributed to participants and police officers watching proceedings.

According to rights group Setara Institute for Democracy and Peace, West Java province has the highest incidents of religious intolerance, with 41 cases last year due to discriminative bylaws and radical groups.