Getting a job with the government should be more about merit, not who you are related to, say church officials, students 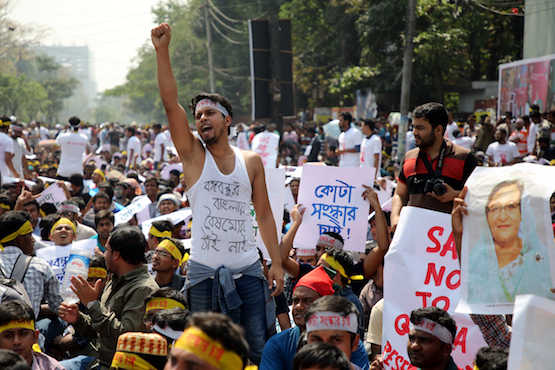 Students take to the streets in Dhaka to call on the government to revise the government job entry system and reduce the quota for various groups from a current 56 percent of positions to around 10-20 percent. (ucanews.com photo)

A quota system used to place people in Bangladesh's civil service has been criticized for being outdated and should be replaced with a merit system, say opponents who include protesting students and church officials.

Students have held protests in the capital Dhaka this week where they have called on the government to review the entry system and reduce quotas in the Bangladesh Civil Service (BCS).

Entry to work for the BCS is loaded in favor of various groups including descendants of the country's freedom fighters who fought for Bangladesh independence from Pakistan in 1971.

The protesters have urged the government to reduce the overall quota to 10-20 percent in order to enable entry of more meritorious students.

The protesters also filed a writ petition with the Supreme Court on Jan. 31 but it was dismissed on March 5.

Hilton Bhowmick, 27, a Baptist Church member and graduate student, is among those calling for a revision of quota system. He was selected in the 36th BCS preliminary tests in 2016 but didn't succeed in the written test. He reappeared in the 38th BCS test this year and is waiting to sit for written exams.

"Some 0.2 percent people are enjoying 30 percent of the quota and often the posts remain vacant in absence of meritorious candidates. This quota system is discriminatory as it deprives meritorious students. Under these circumstances, more than 10 percent quota is absolutely illogical," Bhowmick told ucanews.com.

"Our country is far from valuing students on the basis of their merits and BCS is a prime example," Gomes told ucanews.com.

"I don't think freedom fighters struggled for independence to benefit personally, and after four decades of independence it's unjust and illogical to allocate 30 percent quota for their descendants..

"The system must be revised and the total quota should not exceed 20 percent."

"This quota system worked fine in the past, but it is not relevant today. It was logical to allocate quota for children of freedom fighters, but not for their grandchildren and so on," Father Sen told ucanews.com.

"When we go to government offices, we find many incompetent officers who don't know what they are supposed to do and how to serve people effectively.

"If we continue with the current system, Bangladesh would soon get overburdened with meritless officers and cause the suffering of people."

A senior Catholic and former additional secretary of the government said the quota system is vulnerable to being abused.

"I can affirm many obtained fake freedom fighter certificates and got government jobs, and now their children and grandchildren are exploiting the system," he said.  "The quota for freedom fighters should be 5 percent and the total quota should not be more than 15 percent."

Currently, the BCS employs just over 2 million people. At an entry level position, an employee is entitled to 22,000 taka (US$268) basic salary per month but when extras are included — housing, medical and travel allowances etc — the monthly package is worth  35,000-40,000 taka (US$426-488). Whether promoted or not, every employee gets a 5 percent salary increment annually.

A government employee also enjoys benefits that include interest-free car loans, house-building loans, festival bonuses, savings deposits, insurance and gratuity. After retirement, the employee receives a pension as long as he or she is alive.

In private enterprises, an average salary ranges 10,000-20,000 taka (US$122-244) and employees get medical insurance, two festival bonuses and gratuities after retiring.