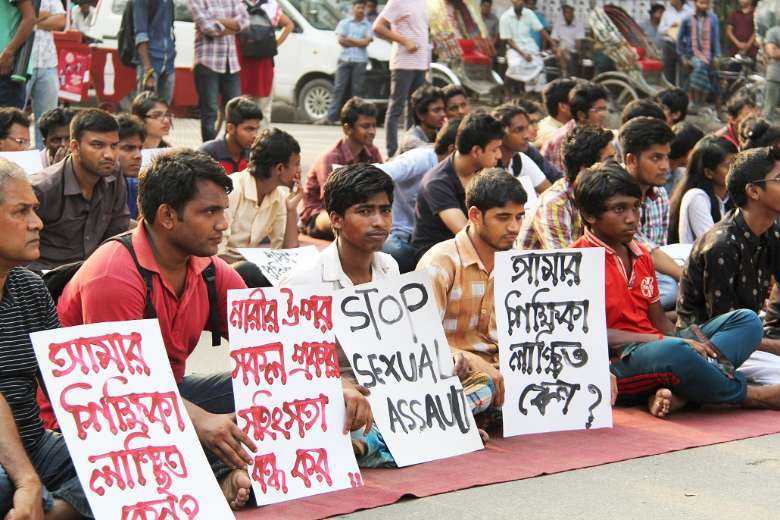 Young people take part in a protest against violence against women in Dhaka in 2015. Bangladesh has seen a spike in rape cases in recent years. (Photo: Stephan Uttom/UCAN)

The trauma she experienced in July 2020 will never be forgotten by ethnic Garo housewife Sufola Mankin.

The 27-year-old Catholic from the Fulbaria area of Mymensingh district, 90 kilometers from Bangladeshi capital Dhaka, was kidnapped by three Bengali Muslim men on July 2, confined in a remote place and brutally raped for six consecutive days.

“My husband works abroad and sends money to me by mobile banking app. A local shopkeeper targeted me and made an indecent proposal, which I strongly refused. He plotted with two others to abduct and rape me,” Sufola (not her real name) told UCA News.

Injured, sick and nearly unconscious from the abuse, Sufola was dumped in a forest on July 8. The rapists wanted her to die, but she survived.

With the help of villagers, she made it to a hospital for treatment for about a week. On July 14, she filed a case against the three rapists at Bhaluka model police station in Mymensingh.

More than six months on, police have not made any arrests. Police say the rapists have fled the area, which is delaying the investigation.

Sufola is frustrated to see justice delayed but is still hopeful. She has drawn legal and financial support for her battle from the predominantly indigenous Mymensingh Diocese.

Apurbo Mrong, convener of the diocese's Justice and Peace Commission, said several women from indigenous communities were raped last year, but they don’t have adequate information as victims have been silent.

“We always assist victims when we are informed. We offer financial and legal support, but often victims don’t seek any support as they fear social humiliation,” Mrong told UCA News.

The case of Sufola is very common in Bangladesh, where the scourge of rape is extremely high but the rate of prosecution and justice frustratingly low.

According to local rights group Ain-O-Salish Kendra (ASK), there were 1,627 rapes, 326 attempted rapes, 53 murders after rape and 14 suicides after rape in Bangladesh in 2020.

ASK also noted that the actual number of rape cases should be much higher as many victims refuse to speak up or file cases, fearing social stigma, humiliation and impunity associated with sexual assault in Bangladesh. Fewer than 30 percent of rape cases go for trial and end in justice for the victim.

That scenario came against against a backdrop of Bangladeshi law stipulating that trials of rape cases must end in 180 working days or six months. Last year, amid nationwide protests over brutal rapes and gang rapes, the government changed the law and introduced the death penalty for rape for the first time.

Women’s rights campaigners blame faulty and lengthy investigations, injustice and a culture of impunity for recurring rapes. Although there is a separate tribunal for trial of rape cases, there is no specialized system for investigation.

Nina Goswami, senior deputy director of ASK, said her organization has dealt with hundreds of cases but didn’t succeed in securing justice in most cases for a host of reasons.

"The problem is that the investigating officer keeps extending the time for investigation. When the charge sheet is placed, it is already too late. Then comes the time for testimony when victims go through embarrassing questions and often witnesses are insufficient,” Goswami told UCA News.

“Courts also need the testimony of the doctor who conducted the medical test and the magistrate who recorded the case. Police often don’t cooperate to make all arrangements. Thus, negligence and lack of accountability make the case weaker and justice is not done.”

Failing to stop rape and the inability to end trials of rape cases within 180 days should be a matter of shame for the nation, rights activists say.

"What could be more shameful than rape and organized rape becoming a normal occurrence in a moderate Muslim country. We should all cover our faces in shame," Sheikh Hafizur Rahman, a professor of law and criminology at Dhaka University, told UCA News.

“Surely there is the lack of justice. Criminals are being acquitted only because of the almost ineffective criminal justice system, but the fact that women have been raped is no longer a lie. If so, how do police file a charge sheet in court? The fact is that there is a problem in our law, the values have been lost. That's the decent thing to do, and it should end there," Rahman added.

Regardless of religion and ethnicity, women are no longer safe as the state fails to protect them, said Rita Roselin Costa, convener of the women's desk at the Catholic Bishops' Conference of Bangladesh.

“As Christians, we are not out of the society and not away from the fear. Since such heinous incidents are constantly happening in this country, we as women are not safe,” Costa told UCA News.

Costa pointed out that there are surely victims and rapists in Christian society as well.

“But we do not speak up out of fear of public shame or we have no respect for the law. We have not done any research or have no statistics in this regard in our community. If we had any, we could have taken action accordingly,” she said.

She also blamed impunity and a decline of moral values in society for the rising menace of rape.

“But we need to raise our voices and demand justice as human beings. If we do not raise our voices, one day me or my child or my relative will be a rape victim,” Costa added.