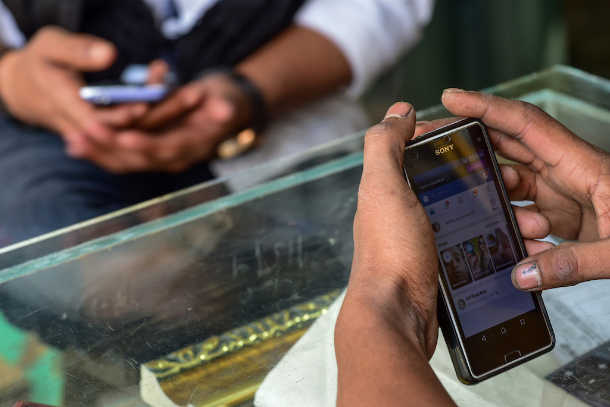 Bangladeshi men use their cellphones in Dhaka on Dec. 28, 2018, after authorities severely restricted internet services across the country in an effort to fight propaganda ahead of the Dec. 30 general election. (Photo by Munir Uz Zaman/AFP)

Bangladeshi authorities have banned thousands of websites and social media apps allegedly linked to pornography, gambling and anti-national sentiments in a move that activists see as an unprecedented moral policing effort in the Muslim-majority country.

Police have also summoned several social media celebrities and ordered them to immediately remove “vulgar and objectionable” content from their pages.

“I want to create a safe and secure internet for all Bangladeshis, including children. And this is my war against pornography. And this will be a continuous war,” he told the AFP news agency on Feb. 19.

Bangladesh’s controversial Digital Security Act 2018 legitimizes the crackdown. The act gives the government sweeping powers to ban any website at any time without citing a reason.

The latest crackdown saw the BTRC list a popular community blog site, somewhereinblog.net, and Google’s online library, Google Books, among the sites to be blocked.

Started in 2005, somewhereinblog.net is Bangladesh’s first and most popular community Bengali blogging site with more than 213,000 registered bloggers at home and abroad. It has over 60,000 visits per day.

The blog entered the spotlight in 2010 amid a tug-of-war between several groups of bloggers, notably atheists versus Islamic extremists and pro-government versus anti-establishment bloggers.

The blog has been blocked since Feb. 19, sparking uproar among the blogging community and civil society groups.

“The blog was blocked due to its anti-national activities,” Jakir Hossain, a senior BTRC deputy director, told Bengali daily Prothom Alo on Feb. 25.

On Feb. 23, about 33 prominent citizens including writers and university professors issued a statement asking the government to unblock the site. Amid the backlash, the government partially unblocked the site on Feb. 26.

The decision to block the site was “silly but premeditated,” said Baki Billah, a prominent blogger and social activist.

“The government hates this blog because people can freely express their grievances against a lack of democracy and rule of law, corruption and social malpractices,” Billah told ucanews.com.

“You cannot stop negative with negative — you should have something positive to stop the negative.”

In response to the brutal murders, the government launched a crackdown on militancy and formed bodies to tackle cybercrime including cyberbullying and hate speech.

The crackdown on blogs and social apps is part of a wider campaign against dissent, according to Nur Khan, a Dhaka-based rights activist.

“We have a government that has no effective opposition and all government bodies are under strict control. Yet the ruling government is afraid of dissent, which represents public anger. So, we have unpopular and unethical laws and moves that curtail freedom of speech and muzzle dissent,” Khan told ucanews.com.

“Authoritarianism has crept into the government and it wants to sustain a climate of fear to crush dissent. That’s the really bad news for our democracy.”

Attack on freedom of choice

“First you need to train people and make them aware about good and bad things. When they can differentiate between good and bad, they have freedom of choice and they will surely choose the good over the bad. Education and proper orientation are important.”

Rights activist Khan agreed. “If you don’t educate people and give them a choice, they will find ways to do what they like by any means. Freedom of choice is a basic right and you cannot violate it.”

According to the BTRC, 91 million people out of Bangladesh’s population of 160 million use the internet and about 85 million access it from their mobile phones.