In a series of reported cases, rapists have married their victims to secure release from jail 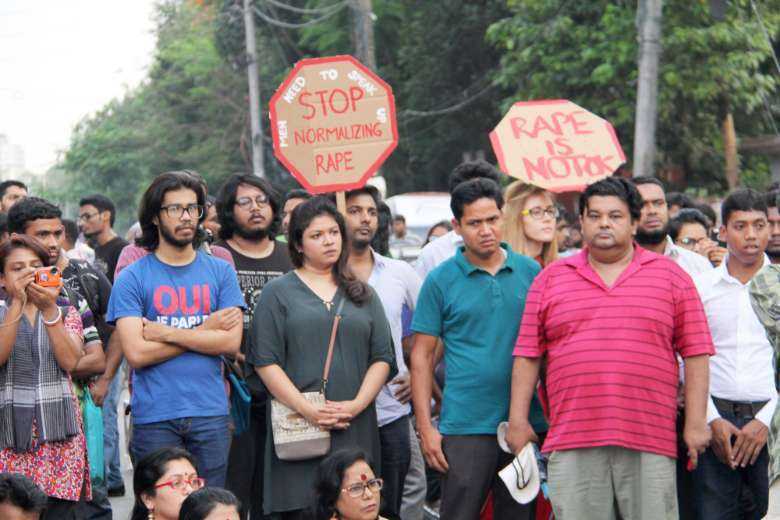 Protesters take to a street in Bangladesh's capital Dhaka in 2017 against the scourge of rape in the country. (Photo: Stephan Uttom/UCA News)

A rising trend of rape victims settling for marriage with their rapists has triggered an angry response from female activists in Bangladesh who termed it unethical and unacceptable in a civilized society.

“Instead of punishment, a rapist is being allowed to marry a rape victim. This is absolutely unethical and it undermines women's rights. If the perpetrators get away this way, then more rape will happen in our society,” said Rita Roselin Costa, convener of the women's desk at the Catholic bishops’ Laity Commission.

In Bangladesh, women and minor girls are socially ostracized when they become victims of rape, she said, adding that even if they go for trial, they lose patience for justice due to the lengthy and complex legal system.

“And then the criminals take the opportunity, marry the victims and get relieved from the punishment,” she said.

Costa, a social activist and mother of three, was speaking to UCA News after a court granted bail to a police officer after he married the woman he raped in June 2020. The inspector was jailed and convicted of rape.

On March 23, Judge Mehedi Hasan Talukdar of the Women and Children Repression Prevention Tribunal in Panchagarh district in northern Bangladesh granted bail to police sub-inspector Abdul Jalil after he married his rape victim on the court's premises.

Bangladeshi media has reported a series of cases where rapists have married their victims, both minors and adult women, and secured bail from courts

Jalil, 45, was arrested and imprisoned after the woman filed a case against him on March 25, 2021, alleging she was raped during an investigation into a land dispute she was involved in.

Local media reported the marriage took place on the premises of the district lawyers’ association office within the court in the presence of Jalil’s first wife, who gave consent for the marriage.

The court granted bail after Jalil applied for bail on the condition that he would marry the victim, his lawyer Mehedi Hasan told UCA News.

“The defendant has applied for bail on this condition and the court has granted the bail. The victim agreed to the condition and Jalil's present wife also consented to the marriage,” Hasan said.

Bangladeshi media has reported a series of cases where rapists have married their victims, both minors and adult women, and secured bail from courts. Some cases were dismissed.

On Nov. 19, 2020, Zahirul Islam Zia was granted bail after he married a teenage girl at a jail gate in Feni district in southeastern Bangladesh. Islam was arrested and jailed after the girl filed a case accusing him of raping her with the promise of marriage.

On Dec. 6 that year, a man married a woman whom he allegedly raped and impregnated in Rajshahi district as the condition for his bail. The man reportedly raped the girl with the promise of marriage in 2011 when she was 14.

"The victim must understand that this marriage will not bring her peace but will increase the oppression on her. The criminal just married her to escape punishment”

Women activists and human rights campaigners have for years complained against a legal provision that they say indirectly encourages the trend of rapists marrying rape victims in Bangladesh.

Bangladesh passed the Child Marriage Restraint Act 2017, repealing a similar British colonial-era law formulated in 1929. The law sets the minimum age for marriage for males at 21 and for females 18. However, Section 19 of the law allows a boy or a girl to marry before the statutory age in “exceptional circumstances.”

Due to the ambiguity relating to the clause, it has been exploited in rape cases involving minors, observers say.

The practice has also involved adult men and women in rape cases such as the latest case involving the police inspector. It comes against the backdrop of Bangladesh’s British-era Penal Code 1860 not allowing a marriage to be absolution for rape charges.

Costa said allowing rapists to marry rape victims amounts to “rewarding the offender instead of punishment.”

“We need to build awareness. The victim must understand that this marriage will not bring her peace but will increase the oppression on her. The criminal just married her to escape punishment,” she said.

She said the Catholic Church has yet to tackle this rising phenomenon directly. However, the Church has been working with the Women Empowerment Project of Caritas Bangladesh to raise awareness over various issues such as rape, sexual harassment, and what women should do when they become rape victims.

“In a patriarchal society like Bangladesh, males always want to save males, but lawyers need to stand for truth and justice"

Human rights lawyer Rina Parvin termed the practice of marriage between rapists and victims as “a miscarriage of justice.”

“This is totally unacceptable from a legal or moral point of view. It is in no way sympathetic to the victim who has endured physical and mental abuse. It is clear the perpetrators resort to such methods only to escape punishment. The victim was raped before the court trial and now she will be raped repeatedly,” Parvin told UCA News.

She noted that when the accused and the plaintiff reach an agreement, the judges have nothing to do.

“In a patriarchal society like Bangladesh, males always want to save males, but lawyers need to stand for truth and justice. Our legal system needs to change so that a rapist is never exempted from punishment and allowed to marry a rape victim,” Parvin added.

Bangladesh has seen a surge in rape cases in recent years with at least three women raped daily.

Following several cases of brutal gang rapes, nationwide street protests erupted in Bangladesh. It prompted the government to introduce the death penalty for rape in 2020, replacing life imprisonment as the maximum punishment.