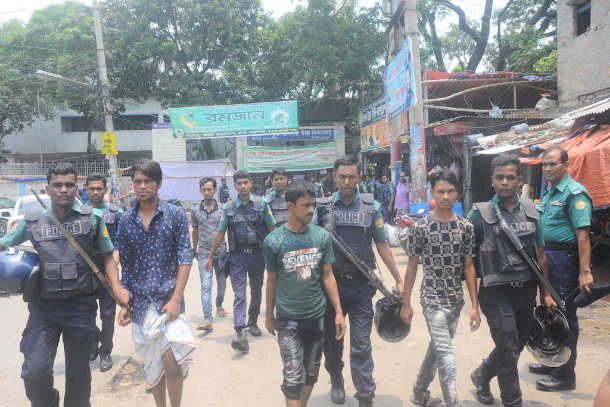 Police escort suspected drug dealers to jail after they were arrested in Bangladesh’s capital Dhaka on June 20, 2018. About 300 people have been killed and 25,000 arrested during a drug crackdown that began last May. (ucanews.com photo)

In early June of last year, 33-year-old Muhammad Tarek (not his real name), the father of a 10-year-old son, narrowly escaped being shot dead by police in northern Bangladesh. His leg was so badly injured it had to be amputated within weeks.

Tarek, a Muslim, hails from a wealthy family in northern Natore district. For over a year, he had been addicted to what became known in Thailand as yaba ("crazy drug"), a vanilla-scented and pink-colored cheap methamphetamine tablet produced in Myanmar and trafficked to various Asian countries.

Tarek was arrested and charged with peddling illegal narcotics and extortion. He vehemently denied both allegations.

"I never traded yaba or any other drug. My family is solvent, so I never had a reason to extort money from others. I don't know who made the charges against me, or why," Tarek told ucanews.com.

He said personal frustrations had led him to become addicted to the drug.

"I used to help run a clinic, but it closed down after the accidental death of a patient. It was frustrating. In order to reduce the depression I felt, I hung out with friends who took yaba, and this is how I became an addict," Tarek said.

Tarek stayed in police custody for four months, including hospital treatment for his bullet-mauled leg. His family secured bail for him in the two cases in September and October respectively. The cases are ongoing and he needs to attend court hearings regularly.

"My younger brother is mentally challenged, so I was the only hope for the family. Now I cannot walk and I have lost hope that I can do something for my family," he said.

Despite feeling victimized, Tarek said he is not bent on seeking revenge.

"My life has already been severely impaired. I don't want to jeopardize what I have left," he said. "The National Human Rights Commission approached me with an offer of legal aid, but I refused. I want to live quietly without any more pain."

Tarek is a victim of a massive police crackdown against the proliferation of drugs in the country, especially yaba tablets, that started in May 2018.

According to the state-run Narcotics Control Department (NCD), Bangladesh has around seven million drug users, most of whom are addicted to yaba.

The war on drugs has seen about 300 alleged drug dealers, traffickers and addicts shot dead by police, and more than 25,000 arrested across Bangladesh. Over 100 were killed during a bloody 10-day spree in May alone.

This has drawn fierce criticism from local and international human rights groups.

The crackdown came after Prime Minister Sheikh Hasina pledged to tackle the drug problems in this Muslim-majority country of 160 million.

Last year, Bangladesh passed a tough anti-narcotics law stipulating the death penalty for those engaged in the illegal drug business.

But many likened the anti-drug raids to the infamous war on drugs conducted by President Rodrigo Duterte of the Philippines, which has seen thousands of drug dealers, pushers and addicts shot dead. Bangladesh police detain a man during a drive against narcotics in Dhaka on June 5, 2018. (Photo by Munir Uz Zaman/AFP)

Apart from targeting drug dealers and users, Bangladeshi law enforcers were accused of hunting people not linked to the narcotics trade.

This came to light after the death of Ekramul Haq in Teknaf town of Cox's Bazar, just across the border from Myanmar. It serves as a major entry point for yaba and has also risen to prominence as the home of refugee camps for Rohingya Muslims.

Haq was a three-time elected councilor for the Teknaf Municipal Corporation and a long-time member of a local unit of the ruling Awami League (AL).

He died during a shootout with police on May 29, 2018, the RAB said. Haq's family claim his death was a planned political killing.

Three days later, an audiotape recording that was leaked on social media revealed law enforcement officers had ambushed Haq. The recording showed he was speaking with his wife, Ayesha Begum, by phone when he was shot dead.

She said Haq had been an anti-drug campaigner who had drawn the ire of well-known drug kingpins including Abdur Rahman Bodi, a former AL parliamentarian from Teknaf.

For years, Bodi has been at the top of the NCD's list of drug godfathers, but he was never arrested or prosecuted thanks to his immense political and financial clout.

Bodi was twice elected an MP, in 2008 and 2014, but the AL denied him candidacy during the national election on Dec. 30, 2018. His wife, Shahina Akter, claimed the AL ticket and won the election instead.

In 2016, after a wave of media coverage, police filed three corruption charges against Bodi. He spent three years in jail and then walked free.

The audio revelation of Haq's killing sparked a media and public outcry, forcing the government to dial down its anti-drug crackdown.

Home Minister Asaduzzaman Khan promised the killing would be properly investigated and the culprits punished. However, the case is still in limbo.

When asked by journalists why the police had never arrested Bodi, Khan said there was "no evidence" he was involved in the narcotics business.

"If you have any information about Bodi or drug dealers, please inform us. There are allegations against Bodi, but there is no evidence," the minister said last May 22.

Local media reported that Bodi, together with his brothers and other relatives, fled the country for months when the government launched its anti-drug crackdown.

They returned to Bangladesh later when things had begun to cool down. 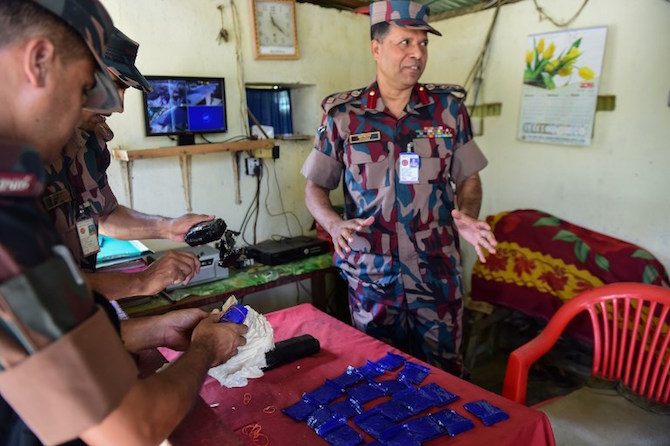 This file photo taken on April 6, 2018 shows Bangladesh Border Guard personnel laying out small bags of the drug "yaba" recovered from a passenger bus in a search at a check post along the Teknaf-Cox's Bazar highway in Teknaf. (Photo by Munir Uz Zaman/AFP)

On Feb. 16, the government arranged a surrender ceremony in Teknaf. This saw 102 drug dealers and traffickers, including several "godfathers," surrender to Home Minister Khan in hope of being granted a second chance. During the ceremony, the dealers handed 350,000 yaba tablets to the police.

"Our prime minister promised that anyone who was willing to denounce illegal drugs would get a second chance and would be assured of rehabilitation. This is a part of our war against drugs," Khan said during the program.

Bodi is believed to have served as the main broker convincing lower-level dealers to surrender to the police in a bid to improve his tainted image.

"Only 102 out of 1,151 listed drug dealers in Cox's Bazar district surrendered that day. Bodi's elder brother is a top yaba lord and he also didn't surrender," said Prodip Kumar, the chief of Teknaf police station.

Activists like Asduzzaman Jewel, the head of treatment at Addiction Rehabilitation Residence (APON), say the war on drugs is "flawed, misguided and destined to fail."

"This surrender was just a token gesture that favors people like Bodi. When prominent drug lords like him walk free, and end-of-the-line drug dealers and users get killed, the government's commitment to eliminate drug menace sound hollow," he said.

Jewel cited the cases of two yaba addicts who were recently arrested and jailed.

"They had no medical services and suffered from food shortages. As a result, they both ended up dying of heart attacks," he said.

"No post-mortems were carried out and the police summarily handed over their bodies to their guardians. This is inhuman and a violation of their human rights.

"You cannot solve the drug problem by killing people if you let the masterminds walk free and kill petty dealers and users. This 'war' is doomed to fail as it is unplanned and misguided. There is only one way to cure a drug addict, and this is selfless service with love, delight and happiness. The addict suffers from hatred toward himself and toward others. If you can give him love and happiness, it can change him."

Bangladesh's drug problem stems from its proximity to the Golden Triangle, a drug-producing hub in Southeast Asia, coupled with rising frustration among unemployed young people and a growing sense of alienation felt by poor migrants in urban centers, said Dr. Edward Pallab Rozario, head of health programs at the local arm of the Catholic charity Caritas.

"For a long time, the drug laws were poorly enforced, so the menace worsened," he said.

"Young people are increasingly depressed, and poor people who migrate to big cities like Dhaka have a miserable life. These are some major causes that the government must tackle, or the drug war will fall flat on its face."