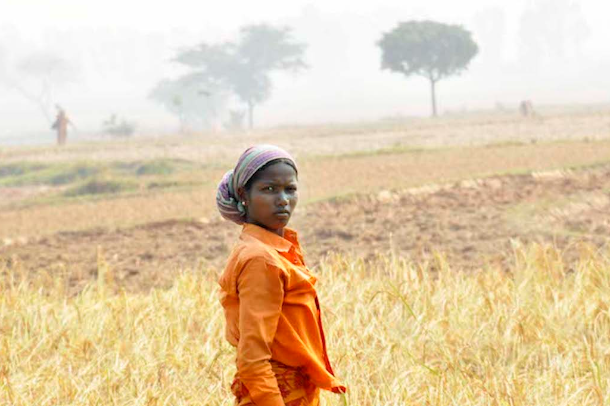 An indigenous Santal woman works in a field in Rajshahi district of northern Bangladesh. Activists have criticized poor funding for ethnic communities in the national budget. (Photo: Stephan Uttom/UCA News)

Share this article :
Rights activists including a church official have decried the lack of funding for development of indigenous communities in Bangladesh’s national budget. They have demanded that the government allocate more funds for socioeconomic empowerment for tens of thousands of poor and marginalized indigenous communities. Finance Minister A.H.M. Mustafa Kamal placed a proposed national budget for the 2020-21 fiscal year in parliament on June 11. It estimated 5,680 billion taka (US$661 billion) in expenditure and 3,780 billion taka (US$440 billion) for income. The budget is expected to be passed at the end of the month. The budget allocated 1.23 billion taka for development of ethnic communities on hills and 800 million taka for indigenous people on plain land. Activists say the budget is too low for the estimated three million indigenous people in Bangladesh and demanded that at least 11 billion taka should have been allocated for proper development and empowerment of ethnic communities.
Related News “This budget comes amid a grave crisis, the Covid-19 pandemic, when many ethnic families have lost work, business and income. Many have become unemployed and surviving on aid from various groups. More funds should have been allocated for these people to bring them back to the mainstream,” said Apurbo Mrong, secretary of the Justice and Peace Commission in predominantly indigenous Mymensingh Diocese. Many ethnic people are poor and marginalized and continue to be neglected in national development schemes and budgets. “I have visited many people at grassroots level, and they are in despair and don’t know what to do to recover from this ordeal. Due to restrictions on movement, we were not able to carry out strong advocacy for more budget allocation for these people,” added Mrong, an ethnic Garo Catholic. Shamsul Huda, a land and human rights advocate, echoed similar sentiments. “Most of the indigenous people live on the fringes of our society and are deprived of state development mechanisms,” Huda, executive director of the Dhaka-based Association for Land Rights and Development, told UCA News. “As always, bureaucrats place a budget for them whimsically without consulting indigenous experts, so real needs remain unidentified and the budget brings no tangible change for ethnic communities.” Not just ethnic people but most Bangladeshis will fail to get dividends from the budget as it is less pro-people but more bureaucracy-dominated, he noted. Fazle Hossain Badsha, an incumbent lawmaker from the Workers Party of Bangladesh, said the budget for ethnic people is insufficient. The government should either set up a separate ministry or department for development of indigenous people or each ministry should have an allocation for ethnic minorities, Badsha noted. About 99 percent of the country's more than 160 million people are ethnic Bangalee (Bengali) and about three million hail from dozens of ethnic groups. While 90 percent of Bangladeshi people are Muslims, ethnic people are largely Buddhist and some are Hindu and Christian. Nearly half of Bangladesh estimated 600,000 Christians belong to ethnic groups, according to church sources. Five out of eight Catholic archdioceses and dioceses in the country are predominantly indigenous.