Five years after three Santals were murdered and many others injured in a mass eviction, legal cases have gone nowhere Ethnic Santals joined by Bengali Muslims and Hindus in Gaibandha district of northern Bangladesh demand justice for deadly violence over a land dispute in 2016 and the return of ancestral land. (Photo supplied)

Thousands of people, mostly ethnic Christians, have marched on the streets of Bangladesh seeking justice for the victims of deadly violence that killed three people over a land dispute five years ago.

About 3,000 people joined the march in Govindaganj area of Gaibandha district while some 1,000 gathered in the national capital Dhaka to protest what they called the delayed legal process to address the violence of Nov. 6-7, 2016.

The protesters shouted slogans and carried placards demanding faster legal action. They also formed a human chain decrying the delay in the trial of criminals five years after the brutal assault, murders, arson and eviction of thousands of mostly Santals in Govindaganj.

Three Santal people were killed and hundreds were injured in the violence when hundreds of thugs attempted to evict thousands of families from the disputed land, allegedly on behalf of a state-owned sugar mill, with support from police and the administration.

Video footage showed the police joining the attackers and arsonists to set fire to the shanties of Santal tribal people.

Abul Kalam Azad, then a local parliamentarian, was accused of complicity in the violence while the top government officer and district police chief faced public outrage and punishment transfers for their actions.

“Why should we still be neglected in an independent country? Why does the government still deny our lawful rights?

The Santal people filed two cases over the attacks and in 2019 police filed charges against 90 people, but Azad’s name was dropped. The cases are still pending in court.

Meanwhile, local outrage reignited recently after media and rights groups revealed that the government was planning to establish a special economic zone on the disputed land instead of returning to its original owners.

The land dispute goes back to the 1950s when the government acquired 745 hectares of the Santals' ancestral land to farm sugarcane at a throwaway price. 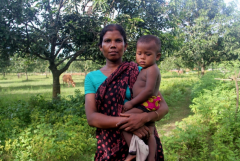 Philemon Baskey, an ethnic Santal Catholic, landowner and rights activist, said the government was violating the rights of the people.

The government took over the land with an agreement but is now implementing its own agenda, he said.

“Why should we still be neglected in an independent country? Why does the government still deny our lawful rights?” Baskey asked, claiming that his family owns 33 acres of land in the disputed zone.

Over the years, the sugar farm declined in production and the authorities leased out most of the land to cultivate crops such as rice, wheat, maize and mustard. That led the Santals to demand the return of the land, which led to violence.

Baskey earlier said that 2,500 families, about 70 percent of them Santals, will lose their ancestral land if the economic zone is established on an estimated 745 hectares of land.

He said people are ready to defend their land. The government and civil society will be responsible if more blood spills over the issue, he said.

“The agreement that allowed requisition of land for industrial purposes was violated when brute force was used to oust the Santal people and three were killed. The land belongs to the community and the government must return the land to the original owners without delay. Justice must be meted out for the murders of people, eviction and burning of houses in 2016,” Saki told UCA News.

Father Anthony Sen, secretary of the Justice and Peace Commission in Dinajpur Catholic Diocese, said local communities have the Church’s moral support in their struggle for land rights, but it cannot get involved directly as the issue is “politicized.”

“We support the protection of land rights of tribal people but the issue has become politically sensitive. No justice, no compensation for the people. The failure to ensure rights and justice is making Bangladesh an increasingly uninhabitable place for minorities,” Father Sen told UCA News.

Ashraf Hosen, deputy manager of the sugar mill, claimed the land was acquired “at a reasonable market price” and there was no way to return the land.

“Once leased out, it means it is now government land, and in that case the government can do anything on that land. Moreover, we will cultivate sugarcane on this farm again in a large scale, so it is not correct that sugarcane is not being cultivated,” he told UCA News.

Mehedi Hasan, an officer for the Police Bureau of Investigation in Gaibandha, said the investigation is ongoing.

“The government is also looking into whether the protesters are owners of the land or not,” he told UCA News.