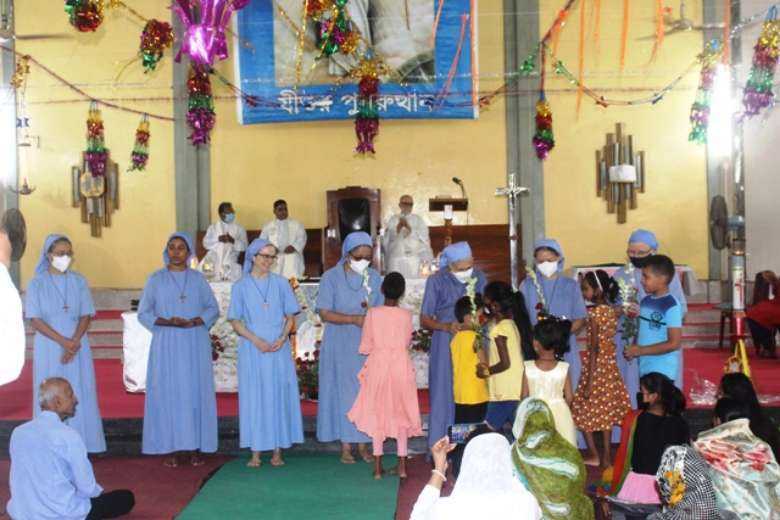 The blue sisters in Bangladesh celebrate the proclamation of their founder Blessed Charles De Foucauld as a saint at a Mass in Khulna on May 15. (Photo: Nicolas Halder)

The nuns from the Contemplative Missionary Movement of Charles De Foucauld, popularly known as the "blue sisters" in Bangladesh, celebrated the sainthood of their patron with a special Mass.

Pope Francis canonized Blessed Charles De Foucauld along with nine others during a Mass in St. Peter’s Basilica on May 15. The blue sisters celebrated the proclamation of sainthood with a Mass in the presence of about 100 local Catholics.

“We rejoice that our patron has been declared a saint by the great grace of God for his silent deeds. We have got the result of our prayers and we are also trying to live up to his lifestyle,” Sister Sabina Hasdak, a spokesperson for the blue sisters, told UCA News.

The nun said the life of the saint was a very ordinary, silent life.

“Meditating on his life, I can see that the work, no matter how small, is acceptable to God and that God is the one who will reflect or reward it,” she added.

The blue sisters arrived in Bangladesh in 1978 and have been working in health care and education, besides making handicrafts to uplift the poor. There are currently nine sisters in three houses located in Dhaka and Khulna diocese. Only two are Bangladeshis while the rest are Italians.

The missionary congregation is known for working without any publicity, said Father Noren Joseph Baidya of Khulna diocese.

Nayan Sarker, 25, who hails from Khulna and is now running a business in Dhaka, said he was indebted to the blue sisters. “I attended a school run by them. I wouldn't be where I am today without the education they gave me,” he said.

Foucauld was born into a wealthy family in Strasburg, France, in 1858. He joined the army and led a comfortable life until he became a believer as he approached his thirties. He responded to the call to lead a contemplative, missionary life until his death in 1916.

The missionary movement of Father de Foucauld was founded by Father Andrea Gasparino in Cuneo, Italy in 1955. It is present in nine countries across Africa, Asia, Europe and South America.