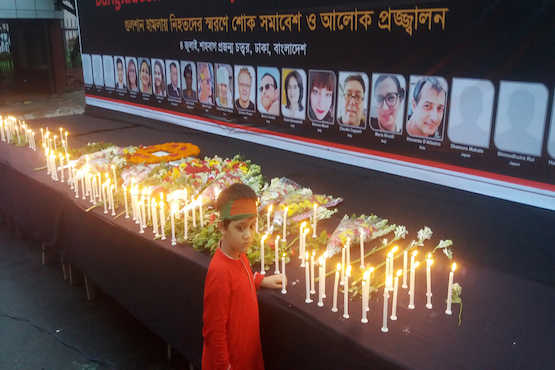 A child pays tribute to victims of Dhaka cafe attack, which left 20 hostages including 17 foreigners dead, during a candlelight vigil in Dhaka July 4. (ucanews.com photo by Stephan Uttom)

Weak family bonds, a faulty education system and lack of government efforts to tackle militancy are contributing to the radicalization of young people in Bangladesh, say human rights workers.

The July 1 attack saw a group of Islamic militants, armed with assault rifles, bombs and swords, massacre 20 hostages in a cafe in the Gulshan diplomatic area of Dhaka.

The Sunni jihadist group, the so-called Islamic State claimed responsibility for the attack, but the government says a banned local militant outfit carried it out.

Police say six young men in their 20s, carried out the attack.

"Two youths hailed from low-income rural families including one being a former madrasa (Islamic school) student, while others were from rich families in Dhaka who studied in top English-medium schools and prestigious private universities, said Masudur Rahman, a Dhaka police spokesman.

"Their families can't escape the blame because they have failed to raise their sons as humanists and didn't properly check on their activities and movements. Had they done so, these youths wouldn't have been lost," Catholic human rights activist Rosaline Costa, told ucanews.com.

"More and more our political system as well as education system is being negatively influenced by religion. This must stop, otherwise nothing would change about militancy," said Costa who is executive director of Hotline Human Rights Trust.

"The government has neglected the militancy problem as it continues to deny presence of global terror outfits, which has emboldened local extremists. First of all it must admit the problem, and engage everyone in the society to prevent and uproot it," she said.

Failure of family, society and state to properly curb militancy and promote a "counter ideology" against Islamic extremism are having youth "radicalized and brainwashed," Shah Ehsan Habib a professor at the sociology department in Dhaka University told ucanews.com.

A government crackdown or killing of suspected militants in shootouts cannot uproot militancy or a fundamentalist ideology, Habib said.

People thought that only madrasas were breeding grounds for militancy, but it proved wrong with the latest attack, he said.

"Extremists work in small networks that entrap youths. We must find these networks and make strong efforts to destroy them and keep our youth away from them," Habib said.

Good family relationships can be a deterrent against youth being radicalized, said Farjana Rabin, a psychiatrist at Holy Family Red Crescent Medical College and Hospital in Dhaka.

"The young men who took part in the attack didn't become militants in one day. It took days. They either enjoyed too much independence or had excessive control, which led them to frustration and a destructive path," Rabin told ucanews.com.

Most parents are busy and don't have enough time to spend with their children, which make children isolated and vulnerable to destructive ideologies, she said.

"Parents need to spend more time with children, so they can freely discuss family and religious values, and teach them to avoid and denounce a wrong interpretation of religion. Education institutes can also play the same role by offering counseling and guidance to keep them on track," she said.

Muslim-majority Bangladesh has seen a surge in Islamic militancy since 2013. Since then, at least 40 people including secular bloggers, writers, academics and those from religious minorities have been killed by Islamic militants.