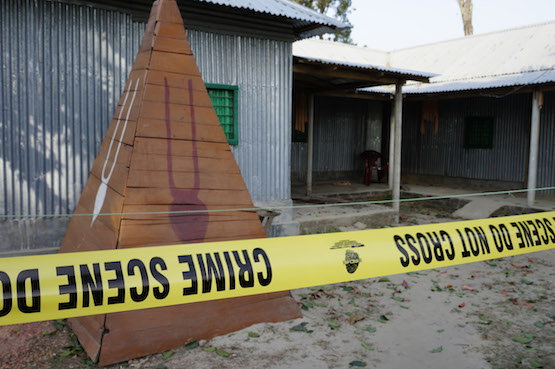 Police tape encircles the crime scene after the murder of a Hindu priest in Bangladesh's northern Panchagarh district on Feb. 21. (Photo by Antuni David)

Police in Bangladesh have detained three people in connection with a deadly attack on a Hindu monastery in northern Panchagarh district on Feb. 21, which left the head priest dead and two devotees seriously hurt.

Three unknown assailants stormed into Shri Santa Gourio temple monastery at Debiganj subdistrict and slit the throat of the monastery founder and head priest Joggeswar Dasadhikari, 50, who died on the spot.

Two devotees were injured as the attackers fired bullets and exploded homemade bombs. The wounded men were admitted to a local hospital for treatment.

Gopal Chandra Roy, 35, was later shifted to Medical College Hospital in Rangpur as his conditions deteriorated.

The other injured man, Nitai Das, described the horrific attack.

"Hearing loud screams, we rushed outside and found two men wearing helmets fleeing the residence of Maharaj (head priest). They had a machete and pistols. They fired bullets and exploded bombs as we approached to priest’s house," Das told ucanews.com.

As people from the nearby market gathered at the monastery hearing gunshots, the attackers exploded several bombs and fled by motorbike, Das added.

The Sunni jihadist Islamic State group, or IS, has claimed responsibility for the attack, according to the U.S.-based SITE Intelligence Group, which monitors jihadist activities and propaganda online. The claim could not be verified independently.

Police officials have brushed aside the IS connection in the attack.

"We have no information to believe that IS has been behind the attack. This might be carried out by local militants or result of an ongoing dispute," Giasuddin Ahmed, police chief in Panchagarh district told ucanews.com.

"We have arrested some people for questioning and we can come to a conclusion once the probe is completed," Ahmed added.

The attack has drawn condemnation from people of various walks of life.

Hundreds of people formed a human chain in Debiganj to condemn the attack and demanding punishment of attackers on Feb. 21.

Father Anthony Sen, convener of the Justice and Peace Commission in the Dinajpur Catholic Diocese area expressed grave concerns over the attack.

"It seems like an attack from religious extremists will add to the ongoing persecution of religious minorities in the country. We condemn this heinous crime and the group behind it who wants to destroy the peaceful coexistence of people must be stopped," Father Sen told ucanews.com.

Bangladesh has seen a series of religiously motivated attacks in recent times.

The Christian community has also come under attack.