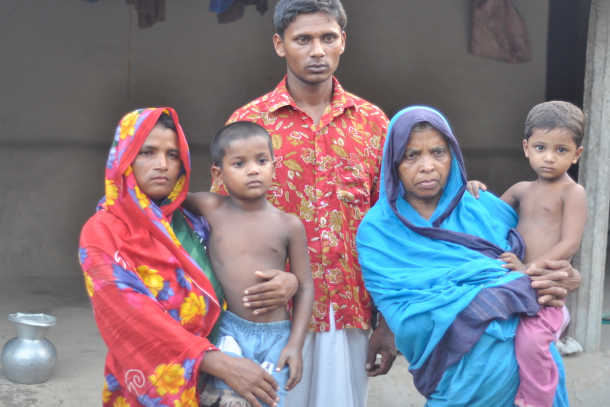 Musammat Aktara (left) with her grandchildren, mother-in-law and son-in-law in front of her house in Bonbari village in Thakurgaon district of Bangladesh. Indian border guards killed Aktara’s husband in May 2015. (Photo by Stephan Uttom/ucanews.com)

Musammat Aktara still shivers in shock recalling the day when she saw the body of her husband for one last time in Bonbari village in northwest Bangladesh’s Thakurgaon district in May 2015.

Abdur Razzak’s body was horribly mutilated with a gunshot wound in his back and brutal cut marks on his head, hands, legs and genitalia.

Out of extreme shock and fear, Aktara fainted. By the time she had regained her senses, her husband’s funeral and burial had been completed.

A local magistrate, accompanied by policemen, delivered Razzak’s body. He warned the family to keep silent and forget about the tragedy, let alone seek justice and compensation.

Indian Border Security Force (BSF) soldiers tortured and shot dead Razzak, a Muslim father of four daughters, on the other side of the fence, Bangladeshi border officials and media confirmed.

Once illiterate and impoverished, Razzak made good profits by smuggling cattle from India to Bangladesh for years. He bought land and built a brick house, much to the envy of his neighbors.

In India, the cow is considered a sacred animal, but it is slaughtered for food in Bangladesh. Cattle in Bangladesh fetch up to five times more money than in India.

However, cattle smuggling along the border has almost stopped since the pro-Hindu Bharatiya Janata Party came to power in India in 2014 and the government imposed stricter measures to halt the practice.

Since Razzak’s death, his eldest daughter and her husband have been staying with Aktara to support the family.

“Allah has been taking care of us. We have some land and we live by cultivating it,” Aktara told ucanews.com. “We don’t hope for justice. People said that if we wanted justice, we would have to spend a lot of money. We don’t have money, so we don’t expect justice.” A farmer takes his cattle home in a village in Thakurgaon district. For years, cattle smuggling on the Bangladesh-India border was the main reason for killings. (Photo by Stephan Uttom/ucanews.com)

Hundreds of mostly Bangladeshi villagers, including children, from remote, undeveloped and impoverished border areas have been killed and abused by the BSF, according to rights groups.

Bangladesh is bordered by giant neighbor India from the east, west and north. Both countries share 4,097 kilometers of border including about 1,116 kilometers that run through rivers jointly shared by India and Bangladesh.

The Bangladesh-India border was fenceless and peaceful until the 1980s. The situation changed after a mass movement in the Indian state of Assam from 1979-85 against alleged illegal immigrants from Bangladesh by the majority Assamese people.

India began building the fence to stop illegal immigration, smuggling and alleged infiltration by members of separatist and extremist outfits. BSF soldiers also adopted a shoot-to-kill policy toward anyone who tried to get close to the fence.

In 2010, New York-based Human Rights Watch termed the BSF a “trigger-happy” force and accused it of killing more than 1,000 people, mostly unarmed Bangladeshis, along the border in the previous decade.

Odhikar, a Dhaka-based rights group, recorded 1,114 killings of Bangladeshi people by the BSF from 2000-18.

“In border villages people resort to smuggling because they are poor, and it leads to killings and abuses by Indian border guards. No way we can accept shooting down people even if they are criminals,” said Father Sen, convener of the Justice and Peace Commission in Dinajpur Diocese.

The shooting of Bangladeshi civilians shows the intolerance of BSF soldiers and the “bullying big brother” attitude of India, the priest said.

“Cattle smuggling recently declined, and an agreement to stop border killings has been signed between Bangladeshi and Indian border guards, but killings continue. This is utter disrespect for the human rights of Bangladeshi people,” Father Sen added.

Strong criticism over border killings at home and abroad has forced Indian authorities to order the BSF to practice restraint in border control. Children play in a village in Thakurgaon district. Most border villages are remote and undeveloped, leading villagers to resort to smuggling for survival. (Photo by Stephan Uttom/ucanews.com)

In 2018, a total of 15 Bangladeshi people were reportedly killed at the Indian border, with 20 dying in the first six months of 2019, according to Ain-O-Salish Kendra (ASK), a Dhaka-based rights body.

“We wonder why border killings and abuses continue despite bilateral discussions and diplomatic pressure. Either a gap in the discussions or Bangladesh’s ‘subdued state policy’ toward India should be blamed for it,” Jyotirmoy Barua, a Supreme Court lawyer and human rights activist in Dhaka, told ucanews.com.

“For the brutalities at the border, Bangladesh can easily seek justice from the International Criminal Court [ICC], but it will never happen because the country wants to maintain good relations with India at any cost.”

During a recent meeting with Bangladeshi Home Minister Asaduzzaman Khan, Indian Home Minister Amit Shah said 80 percent of the border fence had been constructed and it is expected to be completed early next year.

Once India finishes the project, the fence will be longer than the U.S.-Mexico border fence, Israel-Palestine wall and former Berlin wall put together.

Analysts point out that the fence and shoot-on-sight policy have been “largely ineffective” in keeping out illegal immigrants and criminals.

As long as an economic imbalance exists between India and Bangladesh, it will be difficult to stop border trespassing, according to Lt. Col. Samiullah Nabi Chowdhury, commander of the Border Guards Bangladesh (BGB) battalion in Thakurgaon.

“Supply and demand theory can apply, and often a lack of force to control the large border zone triggers crimes including smuggling and illegal immigration. We keep a close connection with Indian border guards, conduct joint patrolling and motivate people, yet intrusion takes place and people get killed,” Chowdhury told ucanews.com.

Sometimes border villagers adopt smuggling as a profession, while some people marry on the other side of the border to ease smuggling, he pointed out.

“BSF officers have told us several times that they shoot when they think they are outnumbered by criminals such as smugglers. The problem is that in most cases Bangladeshi people become victims whereas Indians are also involved,” Chowdhury said.

Since 2014, the BGB in Thakurgaon has been running a pilot project, Alikito Simanto (Enlightened Border), to offer border villagers livelihood schemes including cattle rearing, honey bee farming and mushroom cultivation.

“We are trying our best, but we know that only when Bangladesh’s economic condition equals that of India, border trespassing and killing will stop,” Chowdhury added.