Church should ensure participation of laypeople and women in decisions, speakers say during bishops' conference jubilee 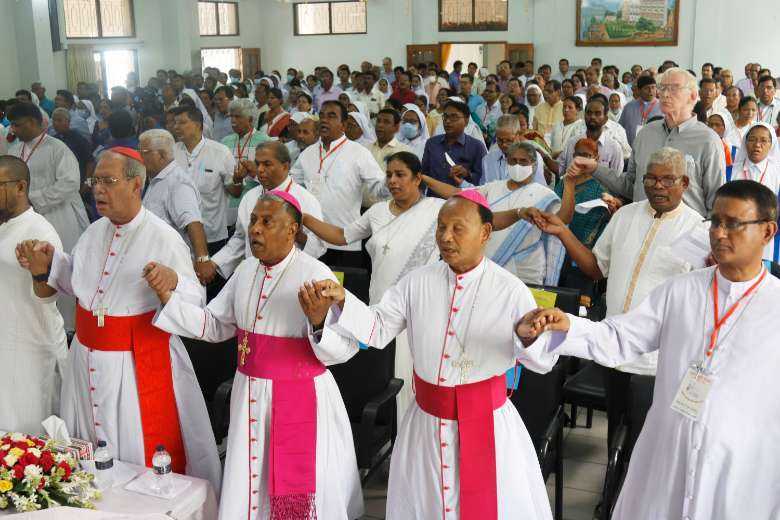 Catholic clergy, religious and laypeople join hands to pray during the 50th anniversary program of the Catholic Bishops' Conference of Bangladesh in capital Dhaka on May 27. (Photo: Stephan Uttom/UCA News)

Catholic religious and laypeople in Bangladesh have called on church leaders to ensure their participation and empowerment as they joined clergy to mark the 50th anniversary of the country’s bishops’ conference.

The golden jubilee of the Catholic Bishops’ Conference of Bangladesh (CBCB) was celebrated with events in capital Dhaka on May 27.

The first part included an inaugural program and seminar at the CBCB center, while the second part had a public Mass and a display on activities of various CBCB commissions at Holy Rosary Catholic Church.

All the country’s bishops including Cardinal Patrick D’Rozario and apostolic nuncio Archbishop George Kocherry joined programs attended by hundreds of Catholics and representatives of other churches.

Bishops told the seminar how the CBCB came into being in 1971 and highlighted its milestones and progress over the past five decades.

Clergy, religious and laypeople also expressed their feelings and expectations.

"In various church bodies, a quota for women should be preserved, just like Bangladesh's parliament has reserved seats for women"

She called for greater empowerment of women and nuns to allow them to participate in policy-making forums.

“In order to allow nuns to contribute effectively in the pastoral life of the Church, they need to be provided opportunities for advanced education and training, and they as well as women need to be empowered and placed properly in the diocesan synod and diocesan and parish councils,” the nun said.

The Church needs to make efforts to ward off long-running prejudices that regard women as “weak and inferior” to men.

“Women have great potential. They deserve better recognition for their competencies and services. In various church bodies, a quota for women should be preserved, just like Bangladesh's parliament has reserved seats for women,” Sister Gomes added.

She called for a proportional quota for women in church activities and policy making, saying that the prevailing attitude toward women in a patriarchal society should be changed, injustice against women should be stopped and security should be ensured. Men engaged in seminars and forums should also be trained to see women as co-workers in pastoral work.

“The Church should make good efforts to drive away injustices against women in the patriarchal family and social systems to pave the way for their proper participation in the Church,” she said.

“As we are holding discussions on a synodal church, we appeal to church leaders to help uplift those women who are still at the bottom. We call for creating adequate opportunities for their equal rights everywhere. They must get necessary support and training for proper representation and empowerment.”

"We need to go to the door of laypeople and listen to them, to strengthen the synodal process. The poor people and indigenous communities who are denied rights and face various forms of injustices should become a priority for the Church,” Father Murmu said.

Marian Simla Gomes, a Catholic college student from Barisal Diocese in the south, said the Church should reach out to young people who are frustrated due to poverty, unemployment and lack of opportunities.

“Poor but meritorious students should be provided with scholarships to help them utilize their talents, those who are jobless need career guidance and those who are frustrated with life need to get a platform that can help them heal their hearts,” Gomes told UCA News.

CBCB president and Dhaka Archbishop Bejoy N. D’Cruze said church leaders are aware of people’s expectations and efforts are underway to make these priorities for the Church.

“Before and during the jubilee program, we have taken note of many things people expect from the Church. During our last pastoral assembly, we made most of these issues our priorities,” Oblate Archbishop D’Cruze told UCA News.

"We truly believe a synodal church is not possible if we cannot ensure the empowerment and participation of laypeople including women in the Church.”

The CBCB was formed after Bangladesh gained independence from Pakistan in 1971. Local bishops were previously part of the Catholic Bishops’ Conference of Pakistan.

Muslim-majority Bangladesh has an estimated 600,000 Christians in a population of more than 162 million. About 400,000 Catholics are spread across eight dioceses.