Pope Francis appointed Father Lingku Lenard Gomes, a priest from Rajshahi Diocese of Bangladesh, as secretary of the apostolic nunciature in Panama on July 1. (Photo supplied)

Church officials and Catholics in Bangladesh have expressed joy over the appointment of the first native Catholic priest to a diplomatic mission of the Vatican.

Pope Francis appointed Father Lingku Lenard Gomes, a priest from Rajshahi Diocese, as secretary to the apostolic nunciature in Panama on July 1.

Christians are happy and proud over the appointment, said Oblate Archbishop Bejoy D’Cruze of Dhaka Archdiocese, president of the Catholic Bishops’ Conference of Bangladesh.

“We, the Christians of Bangladesh, are very happy and proud of his appointment as the first Bangladeshi. It is a diplomatic service on behalf of the Church,” Archbishop D’Cruze told UCA News.

The prelate said Father Gomes has taken on this responsibility and his appointment will inspire other dioceses in the future.

“We have a long way to go. We have to work more, especially with people of other religions, working with migrants,” he added.

Many Catholics also expressed their joy over the appointment and posted congratulatory messages on social media.

Lingku Lenard Gomes was born to a Catholic family who attended Maria Virgo Potens Church of Rajshahi Diocese on Nov. 17, 1981. He was the seventh of nine children. He was ordained a priest on Dec. 27, 2013.

Following stints as an assistant parish priest in two parishes, he was sent to Rome for higher studies. He obtained a doctoral degree in canon law from the Lateran University on June 14, 2021.

Father Gomes said he is unworthy of the post but would continue to do his best for the glory of God. 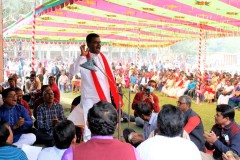 “I request all of you to remember me in your prayers so that I can be faithful and successful in my first diplomatic mission. I am not worthy but always ready to do my best for the glory of God and for the good of the universal Church,” Father Gomes said in an interview with RVA News.

Bishop Gervas Rozario of Rajshahi described the appointment as “a sign of maturity of the Church in Bangladesh” and that the priest will be “our missionary in a special way.”

Christians account for less than 1 percent or an estimated 600,000 in predominantly Muslim Bangladesh of more than 160 million people. Most Christians are Catholics spread across two archdioceses and six dioceses.