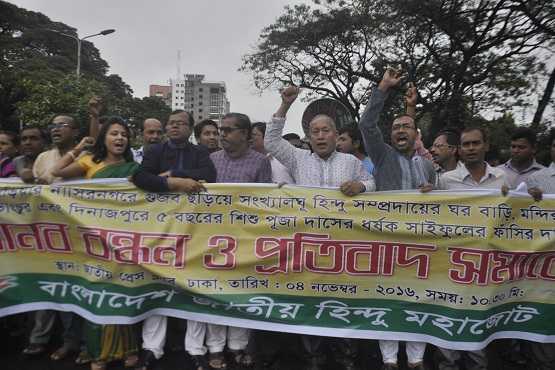 Religious minorities protest against religiously motivated attacks on Hindus in Bangladesh during a rally in Dhaka on Nov. 4. (ucanews.com photo)

Hundreds of Hindus, Christians and Buddhists gathered on Dhaka’s streets on Nov. 4 to condemn the Muslim mob who attacked Hindus last week and call for a full investigation.

In Dhaka, about 1,000 people from 10 religious minority groups including Bangladesh Hindu Christian Unity Council and Bangladesh Christian Association gathered in front of the National Press Club brandishing banners and posters condemning the violence.

The attack on Oct. 30 saw Islamic radicals, enraged by an allegedly blasphemous Facebook post, vandalize dozens of Hindu temples and houses and beat up scores of Hindu people in Nasirnagar in eastern Bangladesh.

"The man accused of posting the blasphemous image is uneducated so it was impossible for him create such a post and publish it. Yet police arrested him and allowed Islamic fanatics to hold a rally which turned into a violent mob that targeted Hindus," said Professor Hirendranath Biswas, president of Bangladesh National Hindu Committee for Social Reform.

"The government must launch a full investigation … or we will launch a larger movement to demand justice and guarantee the chance to live peacefully in this country," he added.

Bishop Gervas Rozario of Rajshahi, chairman of the Catholic bishops’ Justice and Peace Commission said there was a culture of impunity.

"There have been many attacks on religious minorities in the past, but we have not seen any exemplary punishments handed down to perpetrators and this lack of justice fuels increasing repression against minorities," Bishop Rozario told ucanews.com.

"The government must find out who was behind the violence and take steps to punish them. Also, good Muslims should come forward to tackle fundamentalism and protect minorities," Bishop Rozario added.

Amid massive public and media outcry, the ruling Awami League government suspended the Nasrinagar police chief on Nov. 1 for failing to prevent the violence.

"We are doing everything to ensure the safety of victims, provide compensation and arrest the attackers. The administration and law enforcement are vigilant against such violence but maybe that was not enough," Home Minister Asaduzzaman Khan told reporters on Nov. 3. Hindu women protest against religiously motivated attacks in Bangladesh during a rally in Dhaka on Nov. 4. (ucanews.com photo)

The night before the protest, Hindus in Brahminbaria came under arson attack on Nov. 3 when unidentified miscreants set fire to 11 Hindu-owned houses in Nasirnagar.

"The government said law enforcers are vigilantly protecting Hindus, so how this could happen again?" said Professor Biswas. "A government minister claimed that the violence was nothing serious and everything is alright. I think the minister’s apathetic words have encouraged the radicals further."

Visiting the spots, Chowdhury Moazzem Hossain, chief government officer in Nasirnagar said steps are being taken regarding the attack.

"We have informed higher authorities about the latest attack and are holding talks with local leaders about the next course of action. We will do everything necessary to help victims and identify and punish the attackers," he said.

Teams from major rights bodies including the state-run National Human Rights Commission visited the affected villages and termed the violence premeditated and intentional.

"It seems the motive behind the attacks was to grab Hindu-owned land. The local administration and police can’t avoid responsibility for the mayhem as their negligence and incompetence let the incident get out of hand," he added.