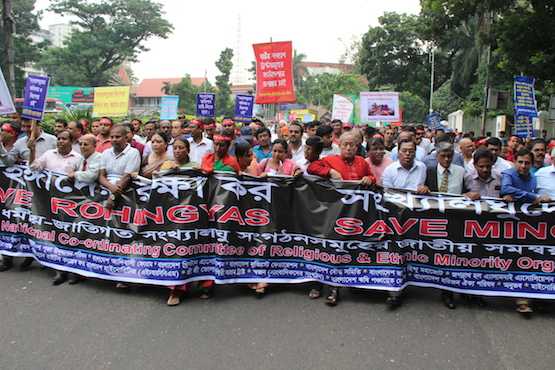 Bangladeshi religious and ethnic minorities stage a protest outside the National Press Club in Dhaka on Sept 14 to condemn deadly violence against Rohingya Muslims in Myanmar. (Photo by Robin Bhabuk)

Thousands of people in Bangladesh, mostly religious and ethnic minorities, protested on the streets of Dhaka to condemn ongoing deadly violence against Rohingya Muslims in Myanmar’s Rakhine State.

"We condemn this bloodthirsty campaign as a crime against humanity and appeal to international community to hold Myanmar accountable and lay war crimes charges against the perpetrators in the International Criminal Court," Dasgupta added.

Ashoke Barua, former secretary of the Bangladesh Buddhist Federation said violence against Rohingya in Buddhist-majority Myanmar is a blow to Buddhist philosophy of peace and tolerance.

"We call for an end to conflict in Rakhine because the atrocities committed against the Rohingya are totally against the teaching of Buddha," Barua said.