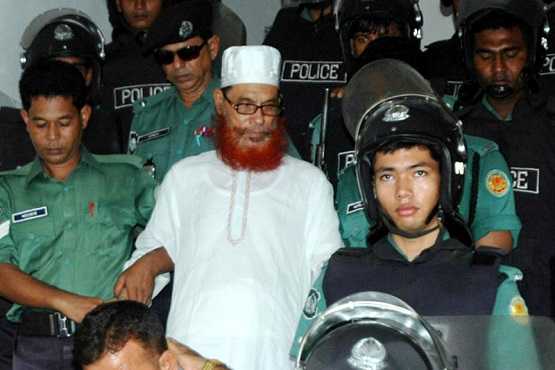 Islamist cleric and former parliamentarian Delwar Hossain Sayedee escorted by police during his trial for war crimes in 2014. Sayedee, senior leader of radical Islamist party Jamaat-e-Islami, must serve life in prison for war crimes during the 1971 Bangladesh war of independence, the Supreme Court ruled on May 15. (ucanews.com photo)

The Bangladesh Supreme Court upheld a life sentence for the leader of the largest Islamist party for crimes against humanity during Bangladesh's 1971 war of independence from Pakistan.

The court said Delwar Hossain Sayedee, a firebrand preacher and former lawmaker from the radical Jamaat-e-Islami party, must remain in jail until death.

A five-judge Appellate Division bench headed by chief justice S.K. Sinha dismissed two separate petitions from Sayedee and the state seeking a review of the previous judgment. Sayedee appealed for acquittal while the state sought the original judgement of death.

The International Crimes Tribunal, a Bangladesh war crimes court, handed down the death penalty to Sayedee for crimes including mass killing, rape, arson and conversion of Hindus on Feb. 28, 2014. Later that year the Supreme Court commuted the death sentence to life in prison

The verdict set off a series of violent protests from Jamaat-e-Islami activists that left over 100 people dead including minority Hindus and policemen.

"The verdict is just; we don't support the death penalty and we don't think the violence in 2014 influenced the judgment. However, it is true that the nation's expectation was not fulfilled which might be due to the failure of prosecution team," the prelate said.

"Among the convicted war criminals, Sayedee is the most cunning and harmful for the country and human civilization but he was not given capital punishment," he told reporters in Dhaka after the verdict.

The sentence has likewise upset liberals and secularists.

"We are aggrieved and disappointed that the verdict failed to fulfill the nation's expectations. A brutal war criminal like Sayedee deserved nothing less than death penalty," said Imran H. Sarkar, coordinator of Ganajagaran Mancha (Public Uprising Forum), a secular movement seeking the death penalty for war criminals and a ban on religion-based politics and political parties.

"The government is appeasing the criminal organization Jamaat-e-Islami and the nation is upset. Our struggle to ban religion-based political parties like Jamaat-e-Islami will continue," he added.

On the opposite side, Jamaat-e-Islami said Sayedee was denied justice and declared a nationwide "peaceful protest" on May 16.

"Delawar Hossain Sayedee was sentenced to life imprisonment on fabricated charges. The nation expected his release but he was denied justice," Mokbul Ahmed and Shafiqur Rahman, respectively chief and secretary of Jamaat-e-Islami said in a statement on May 15.

In 1971, the eastern wing of Pakistan broke away to become Bangladesh after a nine-month war with support from neighboring India. Bangladesh said the Pakistan military and their local collaborators killed up to three million people, raped about 300,000 women and forced 10 million people to become refugees in India.

The ruling Awami League formed a war crimes tribunal in 2010. To date, the tribunal has sentenced dozens of Islamists, mostly from Jamaat-e-Islami and the Bangladesh Nationalist Party, to death and life imprisonment.

The government says the trial is necessary for "national healing" but Jamaat-e-Islami and the national party have called it a "tool for political vengeance."

Surveys show the majority of Bangladeshis support the trial. However, international rights groups have criticized proceedings for falling short of "international standards."