A report by the US Senate sheds new light on the level of verbal, physical and sexual abuse 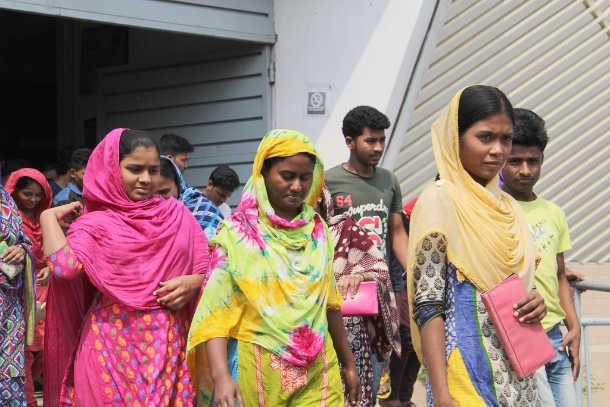 Garment workers rush out of a Dhaka factory during their lunch break. A recent report by the US Senate Committee on Foreign Relations alleges that Bangladesh's garment workers face increased abuses. (Photo: Stephan Uttom/UCA News)

The world of Catherine Biswas (not her real name) came crashing down when her husband, a farmer in Bangladesh's Rajshahi district, died after a massive heart attack in 2012, leaving the mother of three distraught.

“I was shocked and devastated as I didn’t know what I could do raise my two sons and a daughter. My in-laws were abusive, making my life even more bitter. I decided to do something on my own at any cost,” Catherine, 38, an ethnic Paharia Catholic, told UCA News.

Within a year, Catherine moved to Dhaka and found a job in the country’s burgeoning ready-made garment industry as a swing operator.

She is currently employed in a garment factory in Gazipur district, an industrial hub near Dhaka. She earns 15,000 to 17,000 taka (US$176-200) per month, depending on overtime pay.

Her job not only helped her gain self-esteem but also was vital to support the family, including her children's education and well-being.