Writer is one of three spreading 'misinformation' and 'baseless propaganda,' complaint says Bangladeshi Catholic writer and poet Henry Sawpon Howlader is seen in this file photo. He was arrested in Barishal district on May 14 for allegedly defaming a Catholic bishop and clergy through writings. (Photo from Henry Sawpon’s Facebook profile)

Bangladeshi police have arrested a prominent Catholic writer for alleged derogatory writings about a bishop and priests in a southern Catholic diocese.

Henry Sawpon Howlader, 54, a poet, journalist and development worker from Barishal district, was arrested at his residence, produced before a local court and sent to jail on May 14.

“We arrested him as we have found evidence of his defamatory writings that hurt religious sentiments of the Christian community,” Masum Billah, a police officer from Barishal, told ucanews.com.

The arrest came hours after a local Catholic priest, on behalf of church authorities in Barishal Diocese, filed a criminal case against three persons, including Henry, under the country’s stringent Digital Security Act 2018.

The trio had been spreading “misinformation” and “baseless propaganda” against the local bishop, clergy and religious via Facebook and local newspapers for years, the complaint letter said.

Henry was also charged for calling “the bishop and his priests, brothers and sisters stupid” in a news article published in newspapers in Barishal city on April 23. Several local dailies published an article with Henry’s byline that had as its headline: “When Rome burns, Bishop Subrata fiddles.”

The article was a scathing attack on Bishop Lawrence Subrata Howlader and the church administration of Barishal Diocese for arranging a Bengali New Year and Easter Reunion cultural program on April 22, a day after the Easter Sunday bombings in Sri Lanka that left more than 250 dead.

On May 13, Henry told Barishal media that unknown people had threatened to kill him on several occasions since the article was published.

Henry is a writer known for both his poetry and articles, which have been published in mainstream media. He is also an avid user of Facebook, which he has used to write about allegations of clerical and religious corruption and immorality in Barishal Diocese that often resulted in heated online arguments. 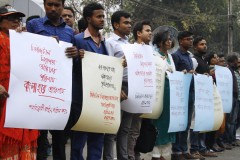 Church officials in Barishal claim his anti-church stance and writings were serving his own “vested interests.”

“For years, Henry Sawpon has carried out an offensive campaign against the Church, the bishop and the clergy,” Father Michael Dewri, vicar general of Barishal Diocese, told ucanews.com.

“Several times the church authority issued letters to him and he promised to stop, but he never did. So, finally we had to resort to the court in order to stop his ongoing malice,” Father Dewri said.

Henry started attacking the Church after church authorities refused to allocate him a piece of land so that he could build a road leading to his house, the priest said.

“We couldn’t accept his request as it would have created further problems for the Church, so he became furious,” said Father Dewri.

The priest explained that the cultural program on April 22 that Henry criticized was pre-planned.

“At the beginning of the program we prayed for the victims and their families, but Henry grabbed this opportunity to mock and attack the bishop, the clergy and the faithful,” he added.

Henry’s arrest has earned extensive media coverage in the country. Many writers, activists and journalists have called for his immediate release.

“Henry Sawpon is well known for his critical writings against anomalies of all religions and religious institutions including the Church. His arrest is just another irrational attempt of curtailing freedom of expression,” Swapon Khandaker, secretary of the Barishal District Journalist Union, told ucanews.com.

“The case of Henry Sawpon shows religious authorities want to gag the voice of anyone speaking against their dirtiness at any cost, and in this case the police have been exploited. This won’t reduce but will widen the gaps in the local Christian community,” added Khandaker, a Muslim.