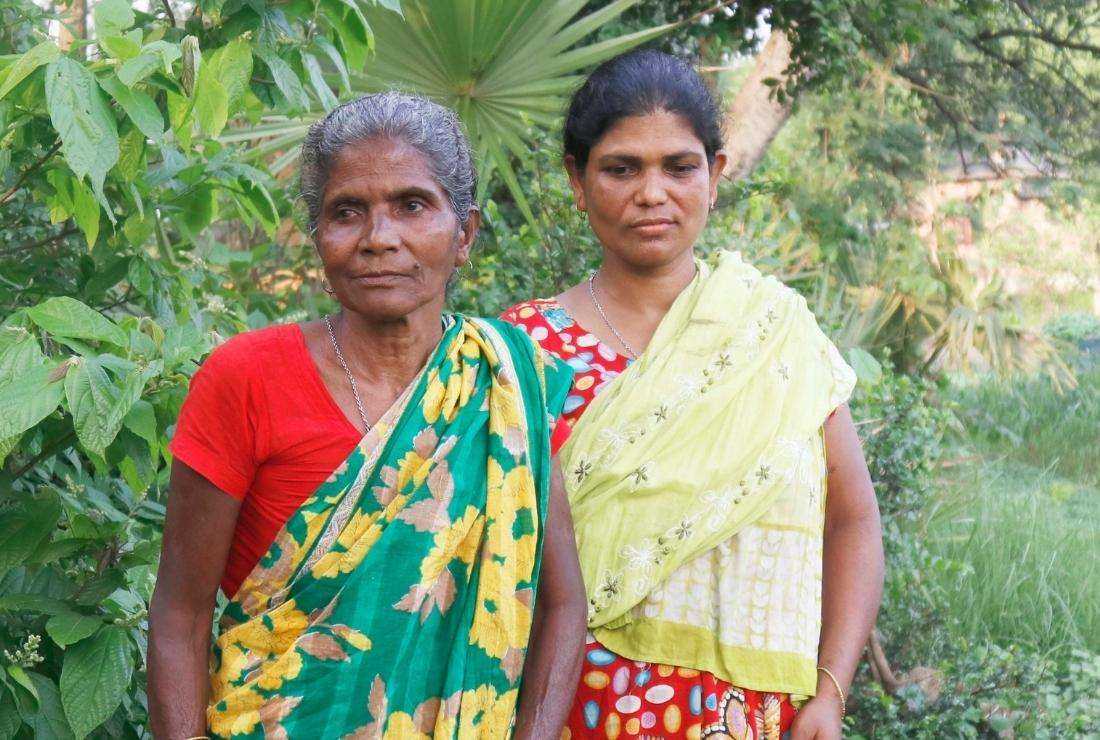 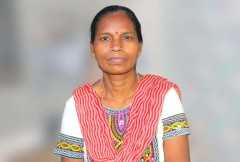 Gabriella Minj, a tribal Catholic mother has become a symbol of Christian faith through her 'firm faith in Jesus'

Monju Rozario, a Catholic mother of four, doesn’t always find the time to pray at home, nor can she afford to go to church every day.

“But I firmly believe Christ is the savior. I remember Jesus, Mother Mary and St. Anthony all the time,” she told UCA News.

This faith has seen her eldest son, Dipto Costa, 25, get through tough training for a challenging job with the Border Guard Bangladesh (BGB).

It is rare for someone from a poor family like Monju’s to land a job in a paramilitary force like the BGB. It means good job security with a steady income, monthly rations and other social benefits.

It was never easy. Dipto felt the heavy pressure as he prepared for the job. And the punishing training schedules to achieve physical and mental toughness were only part of the challenge. Members of the paramilitary force are permitted only limited contact with their families, once in three months and then only for five minutes, which made Dipto very unhappy. Monju, 46, recalls the day when her son even thought of giving up on the rare opportunity. “He would cry during our phone calls and wanted to leave,” she recalled.

But Monju had handed him a rosary when he left for training and advised him to pray whenever he felt lonely or frustrated. “My mother’s words and prayers gave me real strength,” said Dipto, who is now posted in the Sylhet sector.

Not only did Dipto complete the training successfully but he also excelled as a soldier guarding the nation’s borders with India and Myanmar and has been assigned the responsibility of training others, especially in the use of night vision goggles.

Monju is a proud mother today because her son is the only Christian among the 800-strong battalion. “There are many in my group who do not have any idea about Christians. I am glad to be a Christian, a bearer of the message of Christ,” said Dipto.

His mother continues to seek God’s blessings for her dear son, who is now the main contributor to the family’s income.

“I especially pray to God to keep Dipto safe and help him endure all hardships. I tell Dipto to remember the sufferings Jesus underwent whenever he feels he cannot take it anymore. I am grateful to God and believe that my prayers paid off,” said Monju. Monju regrets not being able to feed or clothe her children properly when they were growing up due to the family’s extreme poverty.

Her village, Komlapur, is about 30 kilometers away from capital Dhaka. It takes about 30 minutes by auto-rickshaw, the common mode of transport, to cover the five kilometers to the subdistrict town of Savar, an industrial hub.

The village settlement is surrounded by a combination of fruit plantations, timber and crop fields along with shops and factories.

Monju's husband, Christopher Costa, is a farmer and small businessman. They do not have agricultural land of their own but rent smallholdings to cultivate vegetables such as gourd, pumpkin, cucumber, zucchini and spinach.

To supplement his meager income, Christopher procures jackfruit, mango and drumsticks locally and sells them in the market for a small profit.

Monju is the backbone of the family, assisting her husband in every possible way while encouraging her four children to do well in life.

With their eldest daughter, Ritu Costa, 23, married, the couple now live with their two younger daughters, Asru, 18, and Oishorja, 4, in a two-room house in the village. Adjoining the semi-permanent structure is a makeshift kitchen space and cattle shed made of straw walls.

Monju's day starts early by cleaning the house and the cattle shed followed by preparing breakfast. Then she milks the cows and starts cooking lunch. She also lends a helping hand in watering the fields, removing weeds and harvesting produce. After picking vegetables, Rozario and husband Christopher sort them for sale at a market. (Photo: Stephan Uttom/UCA News)

“From morning till night, I have to run the house and help my husband in the fields. I don’t find time to go to the church or attend a village prayer due to my busy routine,” Monju told UCA News with regret evident on her face. “I don't even have time to go to the neighbors or relatives. I am always busy with something or other.”

But one thing she doesn’t give a miss is going door to door around the village to collect rice and clothes. “We pray with the families and then deposit the donated rice and clothes with the priest to help the poor,” said Monju, who is a member of the St. Vincent De Paul Society in her parish.

She actually lives her Catholic faith and values, which she has passed on to her sons and daughters, who are regular churchgoers and participate in other religious activities. She prays to God with her children whenever she gets time.

There was a time, a few decades ago, when Catholic families would sit and pray together every evening. But no more, says Father Albert Rozario, the parish priest of St. Joseph’s of which Monju’s family is a member.

“Mothers have a greater responsibility in our Catholic Church. Historically, they used to gather the whole family together for evening prayers, but now most families do not have the time. Now in the evenings, most mothers are busy with various kinds of entertainment on television, the internet, etc,” Father Rozario told UCA News.

Monju remembers her mother would not serve dinner if all members of the family did not take part in the evening prayers. She regrets not being able to follow her example as her body and mind are too tired by evening. Christopher Costa milks a cow in the morning to sell milk for some extra money. (Photo: Stephan Uttom/UCA News)

“I still tell stories of Jesus to my youngest daughter and teach her to pray as I did for my grown-up children,” Monju said.

She thanks God for all the blessings that have come their way. “We are much better off now.”

Not long ago, the family would survive on 15,000 taka (US$168) per month. It was a hand-to-mouth existence. “Now we are able to save at least 5,000 taka after deducting our monthly expenses. Our house is now semi-permanent thanks to our son contributing 10,000 taka per month,” Monju said.

The family do not have to worry about the food, clothes and education of the two younger daughters anymore. “I think my wife’s hard work and devotion to God are the main factors that contributed to our family’s well-being,” Christopher told UCA News.

Catholics began arriving in the village around the late 19th century from Kaligonj subdistrict of Gazipur, one of Bangladesh’s oldest and largest Catholic strongholds.

Monju and Christopher’s forefathers came here from Doripara in Kaligonj as their land was taken away for constructing a railway line.

The villages of Komlapur, Dharenda and Deogaon make up St. Joseph’s Parish, which has some 6,000 members, mostly descendants of migrant Catholics. Savar, an industrial hub, continues to attract migrant workers including Christians from adjoining areas and faraway districts who seek to escape the poverty suffered by generations.

According to the church’s records, nearly half of Savar's Catholic population migrated from Khulna and Barisal dioceses in southern Bangladesh. They went there in search of a living and only a few managed to buy land and build a house. Most live in rented houses.

“The area is developing, big industries are coming up and job opportunities are being created. Hence, more people are coming. But at the same time the environment is being polluted. There use to be paddy fields in front of the church but it is now a wasteland due to the dumping of factory waste,” Father Rozario said.

The parish priest is concerned about the impact of environmental degradation on the people.

It’s also affecting their staple diet, said Monju, referring to the falling fish stocks in the nearby river due to pollution.

“Before, we lived in a beautiful environment that did not cause us to get sick. But now due to pollution, various diseases including stomach ailments among children are increasing. The noise due to the presence of factories near our home is a constant irritant,” Monju told UCA News. Christopher complains of falling yields in the fields due to pollution and use of pesticides. "We used to get a lot of coconuts but the coconut trees are dying now,” he said.

Christians in Komlapur owned most of the land as they were the original settlers. But in recent years many have started selling them to factory owners and end up on the losing side.

“The easy money is making people spend more on marriages and other celebrations. The men have taken to drinking liquor. Some are moving out after selling their land. Overall, Christians are losing land and incurring debts,” Father Rozario said.

Monju’s family are still waiting to buy a piece of land as prices have shot up. But the Catholic mother does not have any regrets on this count.

“We don't have land of our own but with God’s blessings, we were able to raise our children as good humans and are able to feed them well now. We live in peace,” said Monju.

Former local public representative Jonas Costa said most Catholics in the area are easy-going and shun hard work. They would rather sell their property to have a good time.

“I personally and church officials have been trying to persuade the villagers not to sell their land. But they refuse to listen. Perhaps they will understand one day but it would be too late then,” he told UCA News.

But Monju’s strong faith has ensured the well-being of her entire family. She hopes they can buy some land in the future. “Not for our luxury but for a better future for our children,” she said.