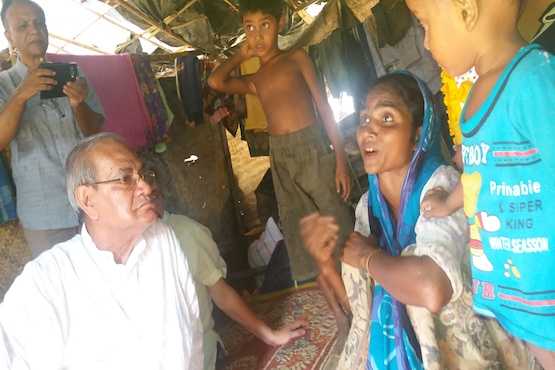 Senior church officials have called for greater "humanity and solidarity" with Rohingya refugees in Bangladesh and pressed for a "lasting solution" to the crisis.

Over 430,000 Rohingya have fled to Bangladesh following a deadly military crackdown in Myanmar’s Rakhine State in response to Rohingya militant attacks on security check posts Aug. 25.

The refugees are now sheltering in 14 camps in Cox’s Bazar and Bandarban, just across from Rakhine state in Myanmar.

Cardinal D’Rozario visited the refugee camps in Bandarban on Sept. 24. He met with refugees, listened to their tales of violence in Rakhine, their pressing needs and assured them of the local church’s support. On behalf of the Bangladesh church and bishops, they donated 1 million taka (US$12,500) for refugees through the chief government officer in Bandarban.

"I met refugees, not to distribute relief material but to express the church’s solidarity and support. Their tales of persecution have saddened me and I assured them that the church will be with them in every possible way," Cardinal D’Rozario, president of the Catholic Bishops’ Conference of Bangladesh told ucanews.com after the visit.

"This is a massive human catastrophe and Bangladesh was not ready to cope with it in the first place. Now things are under control, but the refugees need much support," said Cardinal D’Rozario.

A  "lasting solution" to the Rohingya crisis is a must, but it should not distract from the "prime call of duty" to respond to the humanitarian needs of refugees, he said.

"No doubt, Rohingya have faced horrific persecution in Myanmar but it’s not a time for vilification. First, we need to fulfill their basic needs, and then we should go for a permanent solution to end this crisis," he said.

Archbishop Moses M. Costa of Chittagong, whose archdiocese covers both Cox’s Bazar and Bandarban, in a Sept. 25 statement said that "the brutal attack on civilian children, women and men in the name of action against militancy is fully unjust."

"On behalf of the church in Chittagong, I also express our stand against the violence against humanity in Rakhine, Myanmar. Catholics of Chittagong are urging a stop of this ethnic cleansing operation and take back the refugees from Bangladesh with proper dignity as Myanmar nationals," Archbishop Costa said.

Senior officials from Caritas accompanied both prelates during the visits.

"We have received necessary funds from donors and got government approval to launch field operations, so it will start soon," Ranjon Francis Rozario, Caritas’ assistant executive director told ucanews.com.*

During the first phase, Caritas will offer food items — including rice and wheat, and utensils to some 14,000 refugee families, Rozario said.

"International aid groups are looking for capable partners and this broadens scope for Caritas to undertake maximum effort to help this distressed community," Rozario said.

*This paragraph has been corrected and updated. Ranjon Francis Rozario, was erroneously designated as Caritas’ executive director.