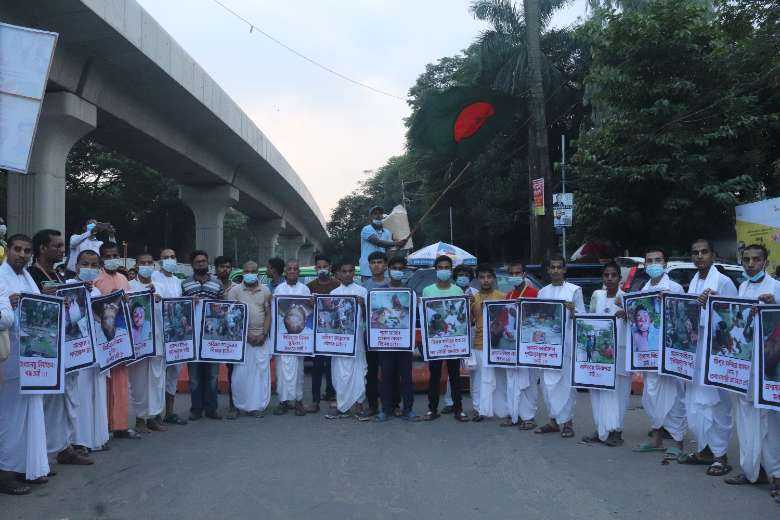 Violence flared in Bangladesh following allegations on social media that a copy of the Quran was desecrated at a Durga Puja venue in Cumilla district on Oct. 13.

At least seven people including four Muslims were killed and hundreds injured as Muslim mobs clashed with police as they attacked Hindu temples, puja venues and Hindu houses in up to a dozen districts, police officials said.

On Oct. 17 night, a Muslim mob burned down 30 houses of Hindus in a village in Rangpur district over allegations of an anti-Islamic post by Hindu boy.

A total of 101 religious sites including Hindu temples and puja venues, plus 181 houses and shops of Hindus, were attacked in six days after the Cumilla incident, according to an Oct. 20 report published by The Daily Star, a leading English daily in Bangladesh.

The anti-Hindu violence prompted the government to deploy additional police and border guard soldiers in up to 22 districts, while hundreds of suspected attackers have been arrested.

The Catholic Church strongly condemns violence against the Hindu community. I think one incident after another was planned

“Reports of a spate of attacks by angry mobs against members of the Hindu community, their homes, temples and puja pandals during the country’s biggest Hindu festival are symptomatic of the growing anti-minority sentiment in the country,” Hammadi said.

“Such repeated attacks against individuals, communal violence and destruction of the homes and places of worship of minorities in Bangladesh over the years show that the state has failed in its duty to protect minorities.”

He said that targeting religious sensitivities to stoke communal tension is “a serious human rights violation” and requires “immediate and decisive action” from the government to address the situation of minorities.

“We urge the authorities to take urgent steps to protect the members of the minority community against such attacks and ensure access to justice and effective remedies for victims. The authorities must promptly, thoroughly, impartially and transparently investigate the incidents and bring those suspected to be responsible for the violence and vandalism to account through fair trials.”

Father Anthony Sen, a member of the Catholic bishops’ Justice and Peace Commission, said communal attacks on minority groups like Hindus are not new and the government cannot escape the blame for failing to prevent such attacks.

“The Catholic Church strongly condemns violence against the Hindu community. I think one incident after another was planned. We demand punishment of the perpetrators through an impartial investigation,” Father Sen told UCA News.

As Bangladesh is a Muslim-majority country, governments hesitate to act against hardliners, fearing the loss of a vote bank, the priest alleged, adding that political parties do anything to stay in power.

“It’s still a long way for Bangladesh to become a truly secular state where all faiths can live in harmony. Yet there is still time to establish peace, but the government must take the initiative. Only the government can stop such attacks because it has power to do so. When minority Hindus are attacked, other minorities including Christians feel unsafe and think they can also be attacked any time,” Father Sen added.

There were 3,710 attacks on minority Hindus in Bangladesh between 2013 and 2021, according to Dhaka-based rights group Ain o Salish Kendra (ASK). The attacks included vandalism and arson attacks on houses, shops, businesses and temples as well as the violent grabbing of land and properties.