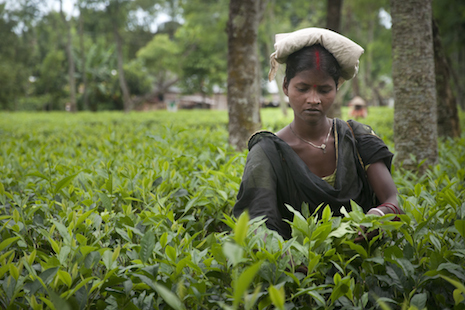 For the fourth consecutive day, about 15,000 Bangladeshi tea workers have continued an indefinite strike against a government plan to acquire hundreds of hectares of land that would adversely affect their lives and livelihood.

Workers and family members from four tea estates in Habiganj district of northeastern Sylhet division are demanding the government scrap plans for a special 207-hectare economic zone on spare agricultural land belonging to the Chandpore Tea Estate, which the tea workers' families cultivate.

The Chandpore estate has 1,655 registered tea workers and a total population of more than 6,000 people. The estate is managed by Duncan Brothers Bangladesh Ltd, a British company.

The government has decided to develop five special economic zones, including one in Habiganj, to attract foreign and domestic investors.

The project in Chandpore threatens the survival of tea workers, labor activists say.

Swapan Santal, a Chandpore worker and adviser to the Bangladesh Tea Workers Union, said appeals to the government to cancel the economic zone plan have gone unanswered.

"For 150 years we have cultivated this land for survival because our income from tea estate is meager," he told ucanews.com Dec. 17.

"In the past, the government has taken over land in other tea estates with fake promises of alternative employment. All we want is to keep our ancestral land and don't want to be cheated any more," Santal said.

Shamim Huda, the estate manager says the government has kept the company completely out of negotiations for the economic zone, while the current protest incurs heavy losses of about US$100,000 per day for the company.

"We don't support the government plan and can't encourage protests. We are in the middle of two warring parties, and only the government can help resolve the issue," he said. Tea workers protest against the government's acquisition of agricultural land at the Chandpore Tea estate in northeastern Habiganj district. (Photo by Mohan Rabidas)

The Bangladesh tea industry comprises 163 estates, the majority of them in four districts of Sylhet division. The industry has about 100,000 registered workers and the tea workers community is estimated at 700,000

They are among the most marginalized and disadvantaged groups in Bangladesh, living in small, thatched-roofed mud houses where they can stay as long as a family member is working. Most workers don't have adequate access to basic needs including education and health services.

A registered worker earns .88-cents a day, which ranks among the lowest wages in the world.

About one-third of the 18,000 Catholics in Sylhet Catholic Diocese hail from the tea workers community.

Father Lawrence Toppo, pastor of the Shaestagonj Catholic Church in Habiganj, said that while the church was not directly involved in the protests, the workers have the church's "moral support."

"Tea workers are disadvantaged people, so any attempt to push them to the brink is unacceptable," he said.

"We are working under direction from higher authorities and don't have much say on the issue," she said, declined to comment further.