Bangladesh shocked by US sanctions on its elite force 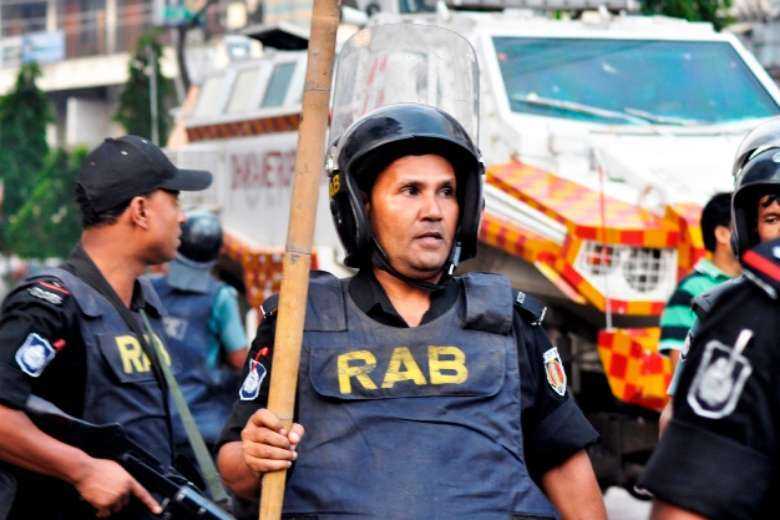 Members of Bangladesh's Rapid Action Battalion in action in Dhaka on May 5, 2013. (Photo: Stephan Uttom/UCA News)

The United States has imposed sanctions on Bangladesh’s elite Rapid Action Battalion (RAB) and six of its serving and former officers for serious human rights abuses.

Former RAB director General Benazir Ahmed, who is now inspector general of police, has been banned from entering the US.

Bangladesh reacted sharply and the Foreign Ministry summoned US ambassador Earl R. Miller to lodge a protest. Foreign Minister A.K. Abdul Momen said the move was "very unfortunate" and "not fact-based" even as Home Minister Asaduzzaman Khan and Law Minister Anisul Haq joined him in criticizing the sanctions in the media.

Khan said that 170 million people live in Bangladesh and policing them was not an easy task unlike many countries of the world. “They [security personnel] face various security situations. Sometimes they have to shoot in self-defense. The right to self-defense is given to them by law. If a homicide occurs, our magistrate will investigate and take action,” he added.

The US Treasury Department had announced economic sanctions against 15 individuals and 10 organizations around the world on Dec. 10, International Human Rights Day.

A day before, Human Rights Watch had called on Bangladesh authorities to stop harassing families of disappeared persons and demanded that the RAB be kept out of UN peacekeeping missions.

Bangladesh’s elite paramilitary force comprising personnel from the police, army, navy, air force and border guards has been under criticism since its formation in 2004 to fight militancy and the illicit drugs trade. Its mandate includes internal security, intelligence gathering related to criminal activities, and government-directed investigations.

Citing private sources, the US Treasury Department said RAB and other security agencies were responsible for more than 600 disappearances since 2009 and about 600 extrajudicial killings and torture since 2018.

Bangladeshi rights groups have been raising the issue of extrajudicial killings and forced disappearances for years. The killing of a retired army officer in Cox's Bazaar by law enforcement agencies in 2020 drew international attention.

The Catholic Church has always stood against extrajudicial killings and forced disappearances, said Father Anthony Sen, secretary of the Justice and Peace Commission of Dinajpur Diocese.

“Our government should conduct a proper investigation into the matter,” he demanded.