The only son of a wealthy family from Kurigram district in the north of Bangladesh, Muhammad Arif (not his real name) had access to all the comforts of life, yet found his greatest comfort in heroin.

Reaching grade 12 at a renowned college in Dhaka, Arif fell in with a crowd who liked to dabble with drugs. “After completing college, I attended parties with friends and started consuming various kinds of drugs. By 2014, I was a heavy user of heroin,” Arif told ucanews.

His parents, high-ranking government officials, became anxious about his future, brought him home and arranged his wedding. But Arif couldn’t kick his habit. He continued to take drugs, jeopardizing his family life and health. His parents became ever more anxious, sending him to six drug rehab centers for treatment, but only the last one has made a lasting impact in his life. 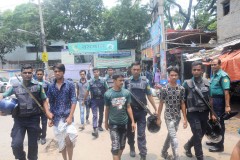