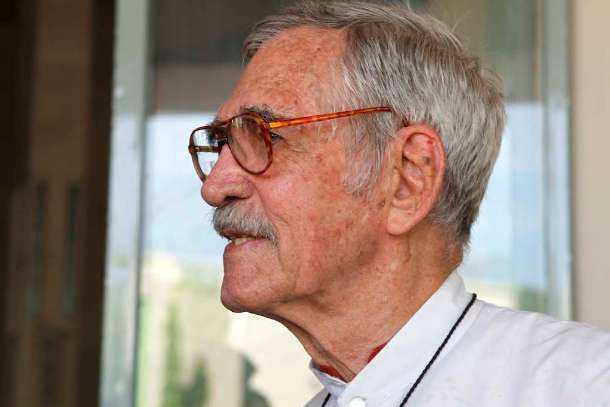 People of all creeds are mourning the death of American Holy Cross priest Richard William Timm, an internationally acclaimed scientist, educationist, humanist and development pioneer who served Bangladesh for more than six decades.

He passed away at a hospital in South Bend of US state Indiana on Sept. 11 at the age of 97.

He had been suffering from various old-age complications and was hospitalized three days before he went into a coma and died a natural death, according to Father James Cruze, provincial of Holy Cross priests in Bangladesh.

“He loved the mission in Bangladesh and the poor people who are denied their rights. He was ready to do anything to uphold the dignity of these people. He was a man for all and always looked at people with the same kind of love and compassion,” said Father Cruze.

“He took great risks with his life while fulfilling his mission. He even criticized governments for their failing to support the needy, poor and oppressed.”

Father Timm was awarded the Ramon Magsaysay Award, dubbed Asia’s Nobel Prize, in 1987 for “his 35 years of sustained commitment of mind and heart to helping Bangladeshis build their national life.”

In 1978, the Vatican accorded him Pro Ecclesia et Pontifice, the highest honor the pope confers to laypeople and clergy in the Catholic Church, for his outstanding role in the rehabilitation and development of people through Caritas Bangladesh.

He was a former superior of Holy Cross priests in Bangladesh and a historian and chronicler of the congregation in the country.

“Father Timm was a great man — a missionary -— who contributed much to the development of Bangladesh, first in the education sector and then in the NGO sector. He was also a human rights activist and served as executive secretary of the Episcopal Commission for Justice and Peace for years,” Bishop Rozario said.

Due to his strong stance against oppression of tribal people in Bangladesh at a UN meeting, he was barred from re-entering Bangladesh, but he came back and continued his rights activism courageously, the prelate noted

Born in Indiana on March 2, 1923, Richard W. Timm was ordained a Catholic priest of the Holy Cross Congregation in 1949. After completing his master’s degree and a PhD in biology at the Catholic University of America, he was sent to East Bengal (now Bangladesh), then part of Pakistan, as a missionary.

From 1952 to 2016, Father Timm was a missionary in Bangladesh and gained fame as a legendary figure. He made outstanding contributions in the fields of biological discovery and research, education, social development, justice and human rights He authored many books and publications and earned great honor for his seminal role during Bangladesh’s War of Independence from Pakistan in 1971.

He wrote secretly to Washington about the genocide conducted by Pakistan’s army during the war and mobilized public opinion in favor of Bangladesh’s independence. The government accorded him honorary citizenship and in 2012 he was among four Catholic priests who received Bangladesh Liberation War awards.

Upon arrival in Dhaka, he started and headed the science department of Holy Cross-run St. Gregory’s College in state capital Dhaka. Set up in 1949 and later renamed Notre Dame College, it is considered one of the finest education institutes in Bangladesh thanks to excellence in academic results, discipline and co-curricular activities. He taught biology until 1971.

His wrote biology books that were highly popular across the country in the 60s and 70s. He was principal of the college from 1970-71.

He was an internationally acclaimed biologist and zoologist who discovered some 250 species of marine nematodes including Timmia parva, which was named after him.

Notre Dame College recently named an academic building in honor of his great contributions to the institute and education sector.

He was one of the founders and first head of the Association for Development Agencies in Bangladesh (ADAB), an apex body of NGOs for negotiation, networking and coordination.

In 1970, following a devastating cyclone that killed about 500,000 people, Father Timm as principal of Notre Dame College collaborated with the Christian Organization for Relief Rehabilitation, which later became Caritas Bangladesh, to carry out humanitarian activities on Manpura Island.

His six months on the island changed his life forever. He left academic life to become a dedicated development worker and humanist. He wrote to his scientific friends about his decision: "People are more important than worms."

He joined Caritas as a planning officer and then served as its director for years. He was instrumental in formation and guiding many leading NGOs that brought him fame as a “father of NGOs in Bangladesh.”

Dr. Benedict Alo D’Rozario, president of Caritas Asia who knew and worked with the priest since 1982, mourned his death as a personal loss.

“I felt orphaned when I heard the shocking news. He was a fatherly figure to me. I have learned and experienced so much from him and received so much support since 1982,” said D’ Rozario, former executive director of Caritas Bangladesh.

He noted that Father Timm was the first person to link human rights with development and pioneered development strategies in Caritas and other NGOs.

In 1974, he started the Catholic bishops’ Justice and Peace Commission and served as executive secretary for 23 years. He published two newsletters in English and Bangla documenting rights violations under successive governments.

In 1984, under his guidance, a survey report based on 1,000 samples revealed the appalling plight of Bangladesh’s garment workers for the first time.

In 1985, he was instrumental in stopping the forcible mass sterilization of tribal people in border areas with support from the US embassy. In 1991, he wrote a book, Advasis of Bangladesh, that documented the plight of tribal people in Chittagong Hill Tracts.

His biography, Forty Years in Bangladesh, was published in 1995.

He edited and circulated Dhaka Letter, a monthly newsletter on affairs in Bangladesh, the Church and Holy Cross Congregation for years, even after returning to America.

A true friend of Bangladesh

“Another great loss. He was a wonderful man and a true friend of Bangladesh,” said Zafar Sobhan, the Muslim editor of English-language daily Dhaka Tribune.

Aroma Dutta, a Hindu, ruling Awami League parliamentarian and executive director of the PRIP Trust, paid homage to the priest.

“What a great person Father Timm was! He was the founding trustee of PRIP Trust, guided us through rainy days, storms, tempests and sunshine. I am so grateful to Father Timm, who nurtured and guided me as a guardian and a father,” she said.

The US embassy in Dhaka issued a statement to pay homage to Father Timm.

“Representing the best of America, Father Timm was an educator, scientist, humanitarian and seeker of social development and justice. His life and his work touched many … The United States and Bangladesh are far better nations as a result of his long, well-lived life,” the statement said.